With UFC 241 looming, Daniel Cormier, Stipe Miocic, and the rest of roster for the event were set to his the scales Friday morning in Anaheim for the official weigh-in.

Daniel Cormier and Stipe Miocic were set to throw down for the second time at UFC 241 in Anaheim Saturday, with just one final hurdle remaining: weigh-ins. The official weigh-in would take place Friday morning in Anaheim, with the ceremonial weigh-ins for fans taking place later in the day.

Before weigh-ins began, the decision had been made by the UFC to make the bantamweight bout between Manny Bermudez and Casey Kenney to a catchweight bout of 140 lbs as both men were cutting a lot of weight.   Both men had no problem making weight for the bout.

Of course, there’d be little issue with either Stipe Miocic or Daniel Cormier making weight for the heavyweight affair. The last to weigh in was Yoel Romero who after missing weight in his last two fights had a lot of attention to make weight.  However, he had no issue as he weighed in at 184.5 on his first attempt.

Officially not a single fighter missed weight or needed a second attempt.

Check back at 12PM ET/9AM PT for results from the official UFC 241 weigh-in on Friday morning! 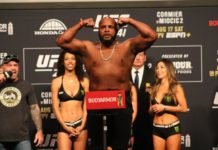 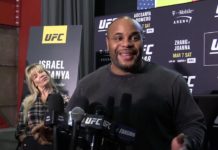