Ray Rodriguez has been helping Alberto Del Rio prepare for Tito Ortiz, but this week, he has his own fight: on the Contender Series, with a UFC contract on the line.

Fighters with a side gig are not uncommon in MMA. The sport doesn’t always pay the bills. Fighters working as coaches, and running their own gyms, aren’t all that uncommon either. But Ray Rodriguez is an interesting case: he’s currently set to face Tony Gravely on the Contender Series this week, while running his own gym, and even training Alberto Del Rio for his upcoming fight with Tito Ortiz.

That’s one heck of a full plate. Cageside Press caught up with Rodriguez ahead of this week’s edition of Dana White’s Contender Series, where he broke down the Gravely fight, running the Ultimate Submission Academy, and more.

Simply put, Rodriguez is “excited about this fight,” he told us. Going a little bit further, he broke down his opponent for us

“Ranking wise, I think he’s like top three in the nation or something like that on Tapology. Good wrestler, he wrestled in college, had a stellar wrestling record in high school,” Rodriguez observed. No slouch on the ground, then. “He’s good, man. He’s beaten a lot of good guys. I’m looking forward to it. He’s going to be one of the toughest guys I’ve fought in my career.”

“It’s going to be good. It’s going to be a good platform to showcase my skills.” And that’s very much what the Contender Series is. Should that showcase turn out well, with a knockout or submission, a UFC deal is likely.

Rodriguez has already been down to the Performance Institute in Las Vegas. “The PI is like a fighter’s heaven, or mecca, whatever. You get there, you have a strength and conditioning section on the bottom, you have a cage, a ring, you have everything that you need, plus you have the cafeteria,” he detailed. “And they kind of cater to the fighters. It’s kind of cool that it is exclusive to fighters only. You don’t have a lot of people sitting in the sauna jut to sit in the sauna. You have people going in there with the mentality to win, to train hard.”

In Rodriguez’s eyes, that is a big plus. After all, if you walked into a gym and saw thirty people trying to kill it, are you about to half-ass it?

He should know. He runs the Ultimate Submission Academy — which can be abbreviated USA. Rodriguez, who has a military background, chose the name for a reason. The gym is more than just a money-making opportunity, however. It’s also an escape.

“Whenever I’m coaching my classes, I’m able to get away from the fighter’s mentality of constantly being on the grind,” he explained. In camp, “I’m fully submerged in what I’m going to do in this fight,” Rodriguez continued. The gym, meanwhile, “it allows me to step away, allows me to hit a reset button. Just get away from it, man. In the beginning of my career, I kind of had a .500 record, and it was because I was doing so much. Too much. Training three or four times a day, watching fight video, and watching highlight tapes. I just got burnt out. Now with the school, I’m able to completely step aside from my camp, train my students, get some of my guys ready for fights. We have a lot of good things going.”

That includes training Alberto Del Rio for his fight with Tito Ortiz later this year. And a solid MMA record boasted by the academy. “Our winning record at USA on the MMA side is over 90% on the MMA side.”

Come Tuesday night, Rodriguez will hope to improve on that.

Watch our full interview with Ray Rodriguez above, and don’t miss this week’s installment of Dana White’s Contender Series. The show airs live on EPSN+, and UFC Fight Pass outside the U.S. 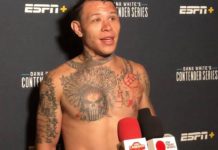 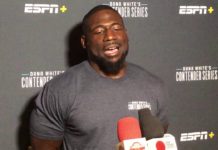 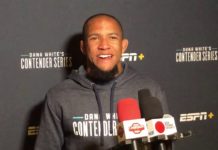