Rani Yahya got back into the win column on the prelims of UFC Vegas 21, submitting Ray Rodriguez in the second round.

Stepping into his first fight in almost exactly a year, Rani Yahya (filling in for Irwin Rivera) was looking for his first win since 2018 at UFC Vegas 21. In a bantamweight bout on Saturday’s preliminary card, Yahya was paired up against Ray Rodriguez. Know as “The Judge,” Rodriguez was looking to play the role of executioner as well in what was his sophomore outing in the promotion.

Yahya opened the fight quickly, putting the pressure on Rodriguez and immediately getting the body lock then going for the takedown. Yahya secured the takedown, and in a flash moved into half guard. Yahya was heavy with his pressure and didn’t allow Rodriguez any room to breathe. Near the end of the round, he eventually locked in an arm-triangle choke. However, Rodriguez ended up wiggling out of the submission attempt and survived to round two.

Yahya started round two the same as the first, securing the takedown early against the cage and using heavy pressure on the mat. Yahya transitioned to half guard as he did in the first, and once again went for the arm-triangle choke. However unlike the first round, this time it was successful. Yahya was able to get fully to the side and put the squeeze, and that’s all she wrote. Another submission win was in the books for Rani Yahya. His 21st, coincidentally. 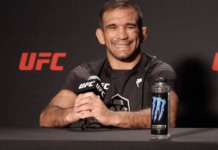