Alex Nicholson has dedicated his life to fighting, from the time he was fighting twice in a month to pay rent. Now, with a young son, he sees a clear difference between a professional fighter, and someone with a job treating fighting as a hobby.

Atlantic City, NJ — It’s been a rocky road for former UFC athlete Alex Nicholson heading to the PFL 2019 post-season. Last year, ‘The Spartan’ was knocked out of the playoffs by Josh Copeland, who would go on to compete in the finals. Opening up the current regular season, Nicholson was taken to the scorecards by Fancimar Barosso, and wound up on the wrong side of a decision, in a fight that saw him nearly finish his fellow UFC alum.

At PFL 6 2019 on Thursday in Atlantic City, Nicholson corrected course. He’d predicted a first round finish against Zeke Tuinei-Wily, and got just that. “If I tell you something it’s the truth,” he told reporters including Cageside Press afterward. “I can’t let my friends, family, and fans down. I can’t let the press down.”

Recapping the fight, Nicholson said that “I hit him with a nice kick to the liver. I kept my distance, I didn’t rush it, he’s a big dangerous strong guy, as all us heavyweights are at this level. I faked another body shot, he didn’t want to feel it, then I cracked him with that right hand to the jaw.” Bob’s your uncle. Tuinei-Wily went down, Nicholson swarmed.

Now, it’s on to the post-season, and a rematch with Barosso. “If there was anybody on the roster I wouldn’t want to fight, it would be myself,” said Nicholson. “But Francimar, he’s got to see me again. He didn’t even want to come to the press conference to talk about it. I think if he was here right now, we’d see it all over his face. I was one punch away from finishing that guy, and I’m going to make sure that punch is delivered in October. Trick or Treat boy.”

Having been through the playoff format once before, Nicholson knows what to expect. But he doesn’t really see much difference either way. “Every fight’s just another fight. Whether we get in a fight at the gas station, or locked in a cage in front of millions of people, I’m fighting for my life. That’s how serious I take it. Some guys say it’s just a sport, some guys say it’s just a fight, but I’m trying to get through the night. Sorry I’ve got to keep rhyming, but that’s just how it is.”

“I take it very serious, now especially [since] I’ve got a little boy,” he added. Family has become a huge motivator for him. And this is how he supports them. “Before I was making big cheques, I was fighting twice a month just to pay my rent. How many guys can say that? A lot of guys are professional fighters, but they have another job. So you’re not really a professional fighter. You have a different job, and this is a hobby. This isn’t a hobby, I made it my life, and I take it very seriously.” 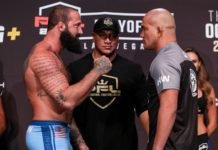 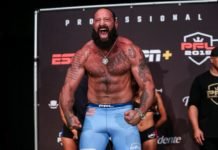