UFC 240 went down Saturday night in Edmonton, Alberta, Canada. Here are three takeaways coming out of that night up north.

UFC 240 wasn’t the most stacked card on paper, however, there are still many storylines coming out of the event. In the main event, Max Holloway returned to his stomping grounds at featherweight to defend his UFC featherweight championship against former lightweight champion Frankie Edgar. The co-main saw former UFC champion Cris Cyborg get the win over the tough and durable Felicia Spencer. The main card also saw wins by Geoff Neal, Arman Tsarukyan, and Krzysztof Jotko.

Here are three takeaways coming out of UFC 240.

Max Holloway is strongly making his case for being the greatest featherweight of all-time.

Max Holloway’s resume is beginning to read like a Hall of Fame list. After dispatching Frankie Edgar Saturday night, Holloway has now defeated three UFC champions. Aside from his wins over former champions Edgar, Aldo, and Pettis, Holloway also has a laundry list of amazing wins under his belt. Beating top-10 fighters left and right his entire career, Holloway has cultivated quite the list of names in his record. Wins over Jeremy Stephens, Ricardo Lamas, Charles Oliveria, Cub Swanson, and Brian Ortega are all helping him make his case for the greatest featherweight of all-time.

For the longest time, Jose Aldo was considered to be the greatest 145er of all-time. Some still consider him to be, and for good reason. Aldo has wins over some of the best under his belt. Wins against Urijah Faber, Mike Brown, Frankie Edgar, Chad Mendes, and Kenny Florian have helped his status. Aldo reigned the division for close to a decade and helped bring legitimacy to the featherweight division after it was brought into the UFC from the WEC.

Aldo’s case is strong, however, it falters when you realize that he got dominated by Max Holloway twice. Holloway defeated Aldo at UFC 212 to claim the featherweight title, then defended it against Aldo at UFC 218, defeating him both times via TKO. One can argue that Aldo was on the downslope by the Holloway losses, however, Aldo was still considered the best in the division when Holloway beat him, and then followed up the losses by defeating two top-five talents in Jeremy Stephens and Renato Moicano.

Max Holloway’s performance at UFC 240 perfectly encapsulates his entire career as a whole. Starting slow and losing round one, then following that up by dominating a future Hall-of-Famer for the next few rounds. Nobody dominates Frankie Edgar like the way Max Holloway did, and that’s a pattern for a lot of fighters who fight Max.

Max Holloway may not be the greatest featherweight of all-time yet, but he will be soon.

Cris Cyborg vs. Amanda Nunes 2 needs to happen, but it probably won’t.

Cris Cyborg got a win over a surprisingly durable Felicia Spencer at UFC 240. After a competitive first round, Cyborg dominated Spencer in the final two rounds, ultimately winning the fight on the judges’ scorecards. Just the fourth time that Cyborg has gone to the scorecards, Spencer was applauded for her toughness and willingness to trade with Cyborg. However, it says a lot that Spencer is being applauded for not being afraid of Cyborg because that speaks to the pattern that so many have.

Following the fight, Cyborg wore a shirt that said “Nunes/Cyborg 2”, she spoke about wanting the rematch in the cage and continued to voice her want for a rematch on Ariel Helwani’s show the Monday following the event. Cyborg and Amanda Nunes notably fought at UFC 232, with Nunes giving Cyborg her first loss in over a decade, via KO. Nunes also called out Cyborg on Twitter following the latter’s win this past weekend, so what’s the hold-up?

Well, if you know anything about Cris Cyborg and the UFC, you know the hold-up. To say that Dana White and Cris Cyborg don’t like each other is putting it mildly. Many remember that years ago, White was boasting about how Cyborg looks like “Wanderlei Silva in a dress and heels.” That is just one isolated example of how the UFC president has treated the former champion.

When you’re staring constant disrespect in the face, and have the option to leave for greener pastures, it’s an easy decision to make. However, Cris Cyborg is still a competitor, and she may want the rematch. We will have to see.

UFC 240 was a night full of amazing prospects. A card that didn’t have a lot of star-power, made up for it in young fighters that were hungry for the spotlight and the opportunity to fight on a PPV-card. Here are a few of the highlighted prospects that showed out up North at UFC 240.

Felicia Spencer’s second UFC appearance was a fight against former champion Cris Cyborg. Sadly for Spencer, the UFC doesn’t have a deep featherweight weight class, so she was rushed to fight the former champion in only her eighth fight. Despite this, Spencer cut up Cyborg with some crazy elbows, never gave up, and gave us one of the most entertaining rounds of the year in round one, where Cyborg and Spencer threw everything and the kitchen sink at each other. Spencer is still a very young fighter, and with her chin and willingness to learn, she can be a future champion one day.

Geoff Neal earned his way into the UFC through the Contender Series and hasn’t lost since. Defeating Brian Camozzi, Frank Camacho, and Belal Muhammad en route to UFC 240, Neal was matched up with fellow prospect Niko Price on the main-card. The fight itself was a war, with Neal coming out on top via TKO. Neal is an extremely well-rounded fighter with good power, and the chin to survive a war if need be. After his win over Price, he should be ranked, and it’ll be interesting to see where he goes from here.

Arman Tsarukyan notably made his UFC debut on short-notice earlier this year against Islam Makhachev and gave the top-15 fighter a tough challenge in ‘Fight of the Night’ effort. The 22-year-old Tsarukyan then was matched up with fellow top-15 talent Olivier Aubin-Mercier. The young Tsarukyan then dominated the Candian Mercier, showing the world that the Makhachev performance wasn’t a fluke and that he’s a young fighter to watch at 155 pounds.

There were also two young Candian featherweights in Gavin Tucker and Hakeem Dawodu that both earned finishes on the undercard. Tucker rebounded from his loss to Rick Glenn in 2017 to finish Seung Woo Choi via submission. Dawodu, on the other hand, dominated Yoshinori Horie to earn his third straight victory in the UFC. 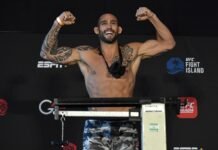 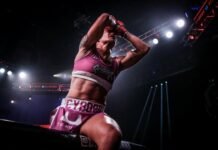