Edmonton, AB — One of the more inspired turns of late in the UFC has been Olivier Aubin-Mercier adopting the persona of “The Canadian Gangster.” OAM, finalist in The Ultimate Fighter Nations: Canada vs. Australia at welterweight, has surpassed ten fights in the promotion now. Yet it’s only in the past year or so that he’s blossomed as an entertainer, something that is a necessity in the fight game these days.

Aubin-Mercier returns this weekend at UFC 240 in Edmonton, Alberta. Which means The Canadian Gangster returns as well, fanny pack and all.

Cageside Press spoke to OAM at the UFC 240 media day on Thursday, and he told us about the origins of the persona, and why he enjoys it so much.

“It was when I fought [Evan] Dunham. During the fight week, if you remember, Conor threw a chair onto Khabib’s bus.”

Never trust any country that says sorry as much as Canada, right? Roving gangs of Canadian Gangsters no doubt lurk in the night. But see, that’s the fun of Aubin-Mercier’s persona. He’s playing a lighthearted character, which means he can get away with a lot.

“The thing is, I like this persona. Because with the new era of promoting the fights, it’s always about ‘I’m the tough one,’ you know?” Not really the Canadian’s style, the whole “‘I’m really tough'” promotional game. “And then the trash talk and everything. I can do all those things with this Canadian Gangster, but differently. I think I can be different. I can be kind of myself, but as a gangster.”

So there’s the look, the fanny pack, the wry sense of humor. Oh, that fanny pack. What’s in there, anyway?

“It’s just really useful. And there’s a lot of illegal things in there,” Aubin-Mercier confessed. Since he’s got a fight coming up, we opted not to press the issue.

On a more serious note, OAM heads into UFC 240 on the first losing streak of his career. Two fights, back-to-back, against Alexander Hernandez and Gilbert Burns. Asked if he’d changed anything in preparation for the fight, Aubin-Mercier said he hadn’t, although “I guess the stress is different.”

“I’m always stressed before my fights.” So that’s no different, it’s just the source of the stress. “I’m not more stressed, I’m not less stressed, it’s just different.”

Facing Arman Tsarukyan at UFC 240, OAM admitted that he “was surprised” with the match-up. “I was not really happy as a careerist. But I was really happy as an athlete,” he said, “because he’s such a good opponent, such a high performer.”

That said, “even if I win this fight, nothing’s going to really come out of it.” One thing might come out of it, however. Aubin-Mercier is on the last fight of his UFC deal, so a win here is key. He’s not really thinking specifically of going in to impress and earn a new deal, but of course, he wants to.

“It would be weird for me to say no,” he said with a laugh. “but every fight I’m like ‘I’ve got to be in there and be impressive.” He wants to finish things with a bang this weekend — and if he does so, The Canadian Gangster should be locked up for many more fights to come.

UFC 240 takes place this Saturday, July 27 at the Rogers Place in Edmonton, AB. The main card airs live on PPV. 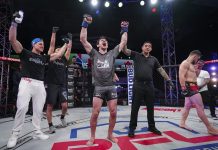 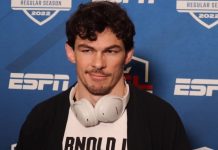 PFL 1 2022: Olivier Aubin-Mercier Says PFL Format “Pain in the Ass” for Athletes, but “Show is Better” for Fans 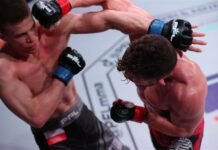