San Antonio, TX — To say Andrei Arlovski looked better at UFC San Antonio than he has in recent fights would be quite the understatement. Arlovski looked the best he has in years against a tough Ben Rothwell who simply would no go down. Lesser fighters would likely have been stopped, but Rothwell went the distance with the ex-heavyweight champ. He nearly completed the comeback late.

Still, it was Andrei Arlovski walking away with a much needed unanimous decision win on Saturday in the Lone Star State. However, an emotional Arlovski’s post-fight comments ran the risk of overshadowing the win following the bout.

“The Pitbull” told reporters including Cageside Press that his son, who he cites as the reason he kept fighting in the bout, told him “Dad I hope you get a victory tonight.” Arlovski made the comment back stage at the AT&T center while wiping away tears.

Arlovski had expected to finish Rothwell in the first round, he said earlier. He certainly fought like that was the plan, getting off to a quick start. It obviously didn’t work out that way. Asked if he still saw several years ahead of him in the sport, after such a brutal war, Arlovski exclaimed “first of all, Ben, he’s a f*cking heavy hitter. Once again, I’ll tell everyone, shut your f*cking mouth about my glass chin. Go f*ck yourself, f*ggots. That’s it. I proved to everyone, you’re f*cking wrong.”

Not the sort of comment that goes over well in this day and age. Arlovski later issued a statement to MMA Junkie apologizing for his choice of words. “I apologize to anyone I offended with my poor choice of words,” Arlovski said. “I did not mean to offend any one group or person. I am deeply sorry and will not use these type of words in the future.”

The UFC also issued a statement to the outlet, saying in part that “The organization does not condone any disparaging comments regarding race, religion and/or sexual orientation. We have already addressed this issue directly with Andrei and his team.”

Continuing on back stage Saturday, Arlovski continued to rail against his critics. “I’m just happy that I shut their mouths again. That’s it,” he said. And despite such an intense battle, he doesn’t want too much time off. Arlovski told reporters that he’d already gone to UFC President Dana White, saying “Dana please give me a fight as soon as possible.” And while he’s aware he’ll need medical clearance, “hopefully [there is] nothing serious. Love fighting, it’s my life. I love UFC.” He feels fans saw the heart he can still offer Saturday.

“I hope fans love this fight. I’m ready to go. Like Reebok,” he added with a laugh, “just do it.” 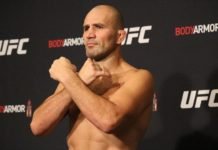 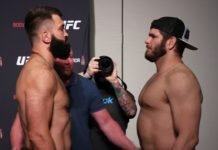 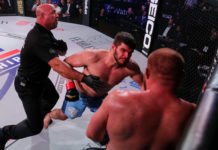 Welcome to the UFC: Philipe Lins