Leon Edwards feels there would be no basis for Jorge Masivdal jumping ahead of him for a title shot. “Who has he beat?”

San Antonio, TX — Leon Edwards’ return to the U.S. went off without a hitch on Saturday night at UFC San Antonio. Now, thanks to a win over a former champ in Rafael Dos Anjos, “Rocky” can enjoy a higher profile than ever before.

It was a far cry from his last trip stateside, which saw him lose to future champ Kamaru Usman. Since that 2015 meeting, however, Edwards (18-3) has been perfect, winning eight straight fights against the likes of Gunnar Nelson, Cowboy Cerrone, and now RDA.

Edwards knew early on that he could have his way with Dos Anjos, he told media outlets including Cageside Press post-fight at the AT&T Center. “He’s a smaller man, I knew once I clinched with him, when I felt his strength, I knew the possibility [was] I could out-grapple him or out-strike him. I could see his punches coming from a mile away, his range is not very long. I knew from the second round, if I keep doing what I’m doing, I’ll get the victory.”

Get the victory he did, a five round decision that left no question as to who the better man was Saturday. The top billing on an ESPN card should earn him a big fight moving forward. And there’s a good chance it could come against rival Jorge Masvidal, whose profile skyrocketed after an altercation with Edwards earlier this year.

When that fight might go down is the question. “I want to fight again end of the year, so October, November, December. Any time then I’ll be ready to fight.” While the fight with RDA was short notice, Edwards would prefer to have a full camp for the next one. “If not Masvidal, the world champion in Usman. Either fellow would be good for me.”

While Usman was originally anticipated to fight Colby Covington, however, the champ is healing up from injury. In the interim, the UFC opted to book Covington against Robbie Lawler, which could open the door to Masivdal jumping to the front of the line.

While Masvidal currently sits at third in the division, Edwards questioned his resume when the title shot suggestion was made. “Who has Masivdal beat? He beat Ben Askren,” Edwards observed. “Ben Askren has fought nobody. He got a close victory against Robbie [Lawler], apart from that I couldn’t tell another person he’s beat that’s a big name. He went to China or wherever it was, stacked up like a 9-0 record, came to the UFC and talked a bunch of sh*t, then he got to number 5 above me, which is weird. I’m on an eight fight win streak now, I’m ranked number 11 in the world.”

Believe it or not, Edwards actually slipped a spot in the most recent rankings update, falling to number 12, despite entering into the San Antonio card having won seven straight. Regardless, Edwards was none too pleased with Askren ever-so-briefly jumping past him in the rankings. Never mind Masvidal.

“That’s crazy, that’s second most [consecutive wins] to the world champion. That’s madness, that shows It’s not about the fights, it’s not about technique, it’s not about winning, it’s just about talking trash on social media,” exclaimed Edwards. “That’s what gets you up there.”

“I think I belong in the top five at least,” he added.

Perhaps now, with a win over a former champ, Edwards will get the respect he’s been looking for. However, he told Cageside Press during Saturday’s post-fight scrum that “I’m at the point where I could not give a sh*t no more. I’ll do what I need to do, I’ll believe in myself, I’ll believe in my team, I’ll believe in my country, and I’ll just keep working and keep chipping away. When it comes it comes. I will not worry about what I cannot control.” 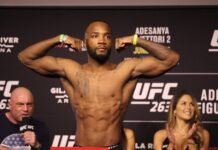