On a night where finishes were scarce, Dan Hooker and Walt Harris found themselves rewarded almost by default.

UFC San Antonio started off with a long stretch of decisions that didn’t exactly have MMA fans jumping out of their seats. By the time the main card rolled around, there was nary a finish in sight. When first two bouts of the ESPN event’s top half also went to decision, you could almost hear fans groan. Thank heavens for Dan Hooker, whose first round knockout of James Vick broke the decision streak.

Straight to the bank 💰

Hooker’s KO was one of three finishes on a night with eleven decisions. And it was enough for Hooker to earn one of two Performance of the Night bonuses.

With such slim pickings to choose from, the UFC made the right choice in giving Walt Harris the nod over Greg Hardy for the remaining Performance bonus. While Hardy secured a TKO of Juan Adams, it was a somewhat controversial finish for the even more controversial fighter, with Adams protesting the stoppage. While the ref made the right call, nothing was cleaner than Harris’ twelve second knockout of Aleksei Oleinik.

Harris clipped his former training partner with a knee, before a powerful punch to the side of the head put ‘The Boa Constrictor’ face down on the canvas.

Fight of the Night honors at UFC San Antonio went to Mario Bautista vs. Jin Soo Son. The bantamweight pair were the second fight in on the preliminary card. While Son is now 0-2 under the UFC banner, at least the extra $50,000 should help take the edge off. 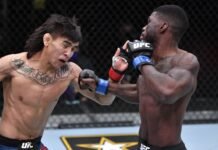 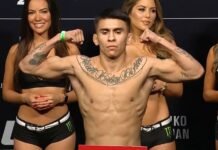