UFC Sacramento featured the successful return of a UFC Hall of Famer and a controversial stoppage in the main event. Here are three takeaways from the California card.

UFC Sacramento wasn’t the most stacked card of the year, but it still had some great fights with high stakes. The main event featured a possible bantamweight title eliminator in a top-five matchup between former featherweight champion Germaine de Randamie and top undefeated prospect Aspen Ladd. The co-main saw UFC Hall of Famer Urijah Faber returning to defeat Ricky Simon via TKO, his first knockout victory since 2007.

Here are three takeaways from that night in Sacramento.

Like her or hate her, Germaine de Randamie’s next fight needs to be against Amanda Nunes. When looking at her previous fights and how thin bantamweight is at the moment, it makes logical sense for de Randamie to get a title shot next. De Randamie hasn’t lost since 2013 and is currently riding a five-fight winning streak, including wins over former champion Holly Holm, former title challenger Raquel Pennington, and just this past weekend over the previously undefeated Aspen Ladd. That win over Ladd helped cement her place as the number one contender in the bantamweight division.

Not only did de Randamie beat Ladd, but she did it in just 16 seconds. Dropping Ladd with a giant right hand, then closing in to look for ground-and-pound was enough for Herb Dean to call it off. Many argued, including Ladd herself, that the stoppage was too fast and that it was premature. However, given that Ladd had a weight cutting scare the previous day, and just got dropped with a massive punch, it’s not crazy to see why the fight was stopped. It’s debatable whether or not she should’ve even been in the cage that night, let alone taking more repeated blows to the head than she needed to.

De Randamie is a controversial figure in the MMA world, mainly due to her late strikes in her championship-winning performance against Holly Holm, then her subsequent vacating of the title as to not face Cris Cyborg, who was coming off a USADA violation. However, regardless of one’s thoughts on her, that doesn’t take away from her last five fights, and it doesn’t take away from the fact that she deserves a title shot in her next fight. Currently riding the longest win streak at the weight class, the only arguable contender is Ketlen Vieira, however, she is currently injured and hasn’t fought in a year and a half.

Now, while de Randmie’s next fight should be a rematch against bantamweight champion Amanda Nunes, that doesn’t mean it should be next for Nunes. Nunes is coming off a title defense against Holly Holm at UFC 239, where she defeated the former champion with a first-round knockout. However, it seems that Nunes has unfinished business with Cris Cyborg at featherweight, and if Cyborg gets past Felicia Spencer at UFC 240, it seems the rematch will likely be made. Thus putting de Randamie on the shelf for a little bit.

However, once Nunes is free from the Cyborg fight, it makes sense for her to defend against Germaine De Randamie.

Ryan Hall continues to be the weirdest fighter in the UFC, but also one of the most impressive. Hall made his big arrival winning The Ultimate Fighter 22 tournament, defeating Artem Lobov in 2015 to win the lightweight bracket. Hall would then begin his incredibly weird resume of wins by defeating Gray Maynard a year later in one of the funniest fights you’ll ever see. He then took off two years to improve and work on his striking. The grappler made his triumphant return against former UFC champion BJ Penn at UFC 232 and made history by becoming the first man to submit Penn in his long career.

Hall then was paired up with former top-15 fighter Darren Elkins this past weekend. Prior to losing two fights in a row in 2018, Elkins was on a six-fight winning streak. Having defeated the likes of Michael Johnson, Mirsad Bektic, and Dennis Bermudez in the UFC, Elkins is a notoriously tough fight for anyone in the division and wasn’t that far out from the top-15 prior to the Hall fight. Ryan Hall went in and knock him down multiple times, dominating him en route to a decision victory.

It’s not hard to see why many overlook Hall in a stacked featherweight division. Hall is 34, doesn’t have much striking experience, and his style can sometimes lead to boring fights. Hall’s fights against Lobov and Maynard aren’t very exciting performances after all. However, his recent wins over Penn and Elkins are very impressive and should at the very least get him someone inside the top-15. Hall is currently riding an eight-fight winning streak and seems to be improving every fight.

He should get someone with a number next so we can see where exactly he fits in with a competitive featherweight division.

Going into UFC Sacramento, there was a bit of talk around former Invicta champion Brianna Van Buren. Van Buren won her Invicta strawweight title in a one-night tournament, throwing back to the days of UFC 1. Van Buren decimated the competition, defeating Kalin Curran in the finals to win the Invicta strawweight title in a dominating second-round finish. Following her championship-winning night, Van Buren was signed to the UFC.

Van Buren was matched up with former Invicta strawweight champion Livia Renata Souza at UFC Sacramento. The former champion was riding a four-fight winning streak and had won both of her UFC appearances. Souza was originally supposed to face Cynthia Calvillo at the event, however, Calvillo was forced to pull out due to injury, leading to Van Buren stepping in on short-notice.

Van Buren made a statement on short notice, dominating the former champion on the prelims as only the second fight of the night. Defeating the Brazilian via decision, the Californian was searching desperately for the finish, but couldn’t get it. Having to settle for a lopsided decision instead, Van Buren got on the mic after the fight and gave an electric post-fight interview, demanding to be on the UFC San Francisco card later this year.

Given Van Buren’s previous wins and performances including this debut win, it’s not hard to see why she’s someone you might want to keep your eye on in the strawweight division. Van Buren is only 25 and is sure to improve over the years, so it’s all up from here. 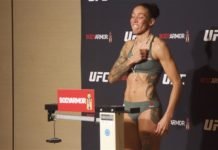