In need of a win to stay in the mix at middleweight, former champ Rafael Carvalho did what he had to do against Chidi Njokuani at Bellator 224 on Friday.

Former middlewieght champion Rafael Carvalho was back in action at Bellator 224, which went down Friday night at the Winstar World Casino and Resort in Thackerville, OK. There, the Brazilian took on Chidi Njokuani, a former welterweight who was looking for new like high up the scale. Friday’s contest was a 190lb catchweight, and had both men in need of a win. Njokuani was coming off a loss to grappling stud John Salter at Bellator 210, while Carvalho had lost two in a row, to Gegard Mousasi (losing the 185lb title in the process) and Lyoto Machida.

Who was going to bounce back Friday? Njokuani was on the outside early, feinting and using his length to fend Carvalho off. The ex-champ looked to solve the distance issue, and eventually grabbed on with a clinch, firing a knee. Ending up by the cage, Njokuani looked to land a knee of his own which was almost caught. Still in the clinch, Carvalho landed a pair of elbows, more knees, and flashed an uppercut. Njokuani fired off another knee, but he simply wasn’t able to free himself, allowing Carvalho to execute his game plan. Carvalho would then take Njokuani down; that allowed Chidi to finally break free, and move back to the outside. However, Njokuani was no doubt down a round heading into the second.

As they got underway for the second frame, Njokuani began firing kicks to the body with authority.  He then moved in for a throw, but at least for the time being, Carvalho fended off a takedown.  Eventually, Carlvalho would reverse position, and when the fight went to the ground, it was Carvalho on top. The takedown was for naught, however, as Carvalho could neither improve position or fire off any offense of note, leading to a ref standup.

Round three started with Njokuani on the attack, but Carvalho had soon clinched, and fired off a knee before driving his opponent into the cage. Time was of the essence for Njokuani, and Carvalho’s game plan wasn’t helping things. Carvalho then landed a taken with an audible thud, landing in half-guard. That was very likely the final nail in the coffin for Chidi Njokuani. He would escape late in the round, and manage to get on top in the final seconds, but Njokuani simply ran out of time. 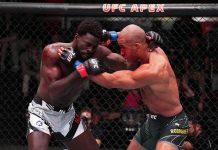