We got to chat with UFC welterweight champion Kamaru Usman at the UFC Hall of Fame Induction Ceremony, and he told us what he considers the best moment in his career.

Las Vegas, NV – Kamaru Usman has started his UFC career wonderfully at 10-0, and the 10th win was a title victory over Tyron Woodley. Usman seems primed to start a dominant reign as the champion.

This interview was recorded before Jorge Masvidal’s amazing five-second victory at UFC 239. Until that point, it was strange that former interim champion Colby Covington was not given a title shot, and instead booked against Robbie Lawler. Kamaru Usman insisted that decision was not influenced by him.

“It’s not me not giving him a title shot. I’ve never said no. I’ve been offered Colby Covington I think five times now and I’ve said yes every single time. I don’t turn down fights. That’s not me. He’s just in a position where he couldn’t necessarily dictate a fight. So that was the organization. They felt like they needed to book him to take that other fight and he did. No hard feelings. That’s definitely a guy that I want to fight.”

Kamaru Usman has had an excellent career in the UFC thus far, culminating with a dominant title victory over Tyron Woodley. The moment Usman will remember forever, though, came afterward.

Whether or not his next fight is against Jorge Masvidal or Colby Covington, it’s clear that Usman is a very special fighter. 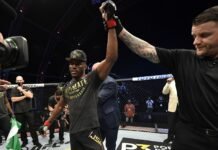