Michael Chiesa will welcome a Fight of the Night award if it comes, but he’s really looking for a perfect game when he meets Diego Sanchez at UFC 239.

Los Angeles, CA — At UFC 239 on July 6 in Las Vegas, former lightweight turned welterweight Michael Chiesa will look to build on a debut win at 170lbs in December. Chiesa, one of the biggest names out of the Pacific Northwest, submitted Carlos Condit in his first foray into the welterweight division. Up next, the original Ultimate Fighter, Diego Sanchez.

It’s a fight that could be a dream, or could be a nightmare, depending on what Diego Sanchez turns up. At least in some playbooks, as fans tend to see old Diego vs. new Diego. Chiesa, however, would rather throw that concept out the window, he told Cageside Press on Monday.

“I think that a lot of people have to disregard the old Diego, the new Diego,” the fighter known as ‘Maverick’ explained. “I think you’ve just got to accept the fact that the guy is good. And this is a sport where, you’re going to win, you’re going to lose, and when you have a long career like him, it’s going to happen.”

A long career is an understatement. Sanchez won the inaugural season of The Ultimate Fighter at middleweight several years before Chiesa even launched his pro career. Now, over a decade later, the pair will meet for the first time.

“He could have ended his career four years ago,and he’d be on the up-and-up,” Chiesa pointed out of the ups and downs of his next opponent. “But he stuck it out, had a couple losses, now he’s back on a two fight win streak against two guys who are— I mean both of those guys are big, tall, huge welterweights. And he went out and beat them.”

Those two guys in question are Craig White and Mickey Gall. Sanchez defeated both, giving him his first winning streak since 2011. And so, Chiesa said, “I’m not looking at the old Diego or the new Diego, I’m just ready for Diego. I’m ready for Diego Sanchez, that’s all.”

Not surprisingly, many are picking Chiesa vs. Sanchez as a Fight of the Night candidate at UFC 239. Chiesa, however, isn’t about to fight with that possibility in mind, bonus money or not.

“I think that him and I aren’t going to adhere to what anybody wants us to do, we’re just going to do what we want to do,” he explained. “That’s just how we want to fight.”

What he won’t do, however, is try to mimic those who have beaten Sanchez in the past. “I’m not one to play kick and run, I’m not trying to do that this fight,” Chiesa promised. “I think a lot of people do that, and have had success doing that against Diego. I’m not that guy, I’m going to go fight my fight. If it turns out to be Fight of the Night, that’s cool, but I’m really trying to pitch a shutout.”

Hoping for a Fight of the Night, to Chiesa, it like hoping for a rough day at the office. “It’s like if you played for a sports team, that’s like saying ‘man I hope we’re getting our butt kicked and at some point we come back and win.’ No, you want to go play a perfect game. You want to execute perfect plays. No fouls. You want to win.”

“If it becomes Fight of the Night, I welcome it, but I’m really trying to pitch a shutout,” Chiesa finished.

UFC 239 takes place July 6 at the T-Mobile Arena in Las Vegas. Watch the full interview with Michael Chiesa above. 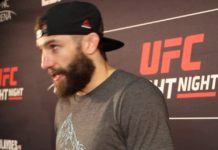 UFC 253: Jake Matthews Wants Either a Top 15 Opponent Or Another Legend Following...