Deron Winn’s perfect record was on the line at UFC Greenville on Saturday. After a hard-fought three rounds against the returning Eric Spicely, it remained intact.

UFC Greenville started out with the debut of Deronn Winn, as he took on Eric Spicely — the third opponent he was slated for on this card in his UFC debut. With Markus Perez pulling out due to injury and Bruno Silva failing a drug test, Winn’s UFC debut fell to Spicely. Winn is the AKA wrestler that had built a 5-0 record and had many eyes on his UFC debut. The bout came at middleweight — despite Winn previously fighting at 205lbs.

Winn comes out loose. Spicely throws a cross to keep him honest. Another overhand from Spicely had Winn stunned. The Winn starts firing with grappling exchanging and 1-2 combos. Spicely thows a big over hand as Winn catches him with a big shot and knocks him down. Spicely gets up quickly. Winn starts hunting him down now throwing big shots his way. Winn pushes Spicely against the cage and throws a giant over hand. Spicely sets up the Muay Thai clinch and Winn simply throws him to the ground. Winn continues to show off his hands piecing up Spicely. Spicely catches Winn with a big knee and backs up Winn early. The two get in the clinch and gets in some dirty boxing. Spicely tries to get the Thai clinch and Winn throws two massive hooks as he exits. With one minute to go, Winn is still loose. Spicely comes in with a leaping knee that just catches Winn with no damage. In the waning seconds, Winn throws a huge spinning high kick that misses.

Winn starts the second round mixing shots to the head and body. Spicely answers back then gets backed up to the fence and covers up. Winn pours on the shot as he continues to stalk down Spicely. Every shot he throws has natural heat on it. Winn gets in three shots to the body against the fence and continues to work. Spicely points to the ground and says, “Let’s go.” Winn pours on more and more 1-2’s. Spicely is visibly tired. Win pushes Spicely against the cage and Winn catches a big elbow from spicely on the left side. Winn and Spicely gets on the fence and begin to throw shot after shot at each other. Winn exits and stalks down Spicely to the center of the octagon and to the other side of the cage and begins to work against the cage again. Deron Winn gets caught in a Thai clinch and eats several knees before throwing more big punches at Spicely. Winn pushes against the fight against the fence again. They fool around in the Thai clinch some more while Winn throws more bombs at Spicely.

The third round starts and the two fighters high five each other. Winn looks more tired than previous rounds. Winn still marches forward and does his best work against the cage, once more. Every time Winn gets in the clinch, Spicely gets in the Thai clinch and throws a big knee, this time hurting Winn. Winn catches a huge left hook to the chin and Winn eats it. Spicely begins to walk down Winn. Winn shoots a takedown and Spicely goes right back to the Thai clinch. Spicley continues to walk down Winn. Winn’s punches have much less heat on them at the 2:30 mark. Winn is in the Thai clinch and eats several knees before pushing the fight to the fence. Winn eats a couple more knees and throws several hooks back at Spicely. Spicely starts relying more and more on the Thai knee as the round goes. Winn keeps throwing over hands and landing on Spicely. One minute to go and Spicely goes for the clinch with Winn pushing him off. Winn lands more combos with 45 seconds to go putting an exclamation on this fight. Win taps his chin after eating another shot. Winn throws a head kick and falls down. 10 seconds to go and they stand in the center and bang it out. 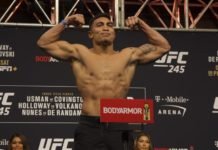 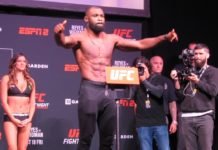