Journey Newson will step up on short notice to take on a very tough Brazilian in Ricardo Ramos next week at UFC Minneapolis.

The UFC is coming to Minneapolis, Minnesota, on June 29. The card is set in stone with 13 bouts headlined by Francis Ngannou and Junior dos Santos. The card holds important contender bouts for the future as well as four debuting fighters. Sergio Pettis was originally supposed to take on Ricardo Ramos, but pulled out and new signee Journey Newson will take his place.

How Will Journey Newson Fare in the UFC:

Newson has begun his career strictly as a BJJ practitioner. With some work on his striking and getting a background in boxing, he’s become a better fighter. He hasn’t fought the best of competition but at least most of his opponents had more experience at the time they fought. In terms of striking, Newson has some big power in his hands as shown in his last bout, getting a knockout. He will rush forward with power shots in the blitzes he will utilize often. He’s getting better but is not the most technical guy and is hittable, being willing to take one to give one. His jiu-jitsu is solid and his three submissions don’t really show it. It’s really the control, transitions, and the fluidity that stands out with his ground game. Let it be known he hasn’t really been tested against a good BJJ guy as he will in the UFC and his wrestling also needs to improve. I would have liked to see him in the Contender Series but a signing on short notice is a good pick up.

How Journey Newson Matches Up with Ricardo Ramos:

This is a very hard debut for Newson, but one he could win. On the feet, Ramos has the advantage as he mixes in kicks and punches and is overall more technical. Where Newson does have the advantage on the feet is with his power in his hands. Other than a body kick finishing him, his chin has held up but his striking defense isn’t up to par. Ramos has shown solid takedown defense so Newson most likely won’t be able to secure takedowns. Ramos, though, will shoot for takedowns and it’s unknown how the takedown defense of Newson is. If Ramos was to get the takedown, Newson has good BJJ as does Ramos, but Ramos has shown he’s vulnerable in scrambles. Ramos also gets tired as the fight goes and if Newson still holds power in the later rounds, he can put the Brazilian away. If Ramos is a heavy favorite it’s worth the risk to take Newson but with experience, technique, and being more well-rounded I favor Ramos. 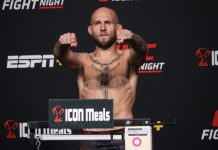