On Friday morning, UFC Greenville’s lineup of fighters hit the scales for the event’s official weigh-ins.

The UFC returns on Saturday, this time heading to Greenville, South Carolina for the first time in the promotion’s existence. The first ever visit to The Palmetto State goes down at the Bon Secours Wellness Arena, airing on ESPN+. So of course, all fighters on the UFC Greenville card were scheduled to weigh in Friday morning.

In the main event, Chan Sung Jung, better known as the Korean Zombie, was scheduled for the first time since an insane main event fight at UFC Denver last year. Zombie was knocked out in the final second of the five-round fight by Yair Rodriguez, in an absolutely thrilling battle that was a fitting end to the promotion’s 25th anniversary show.

Moicano, meanwhile, was looking to bounce back after a loss to Jose Aldo in February at UFC Fortaleza.

John Lineker has withdrawn from the event, and will not weigh in.

Check back starting at 9AM ET for updates as fighters hit the scales in Greenville! 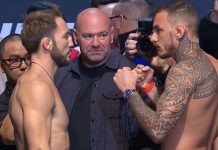