After a decision loss at Bellator 222 in a fight booked short notice, Larkyn Dasch would like a second crack at Valerie Loureda.

New York, NY — She was labelled the “Hooters Girl” ahead of Bellator 222. Short notice cannon fodder for promotional darling Valerie Loureda. But Larkyn Dasch held her own Friday night at Madison Square Garden, going the distance with the decorated Taekwondo specialist.

Speaking to reporters including Cageside Press after the fight, Dasch explained that “with the time I had to get ready for this fight, I did what I could. I said I was going to come to this cage and give it what I had.” She feels she did just that. “Obviously there were things, little things I would have loved to tweak. I would have loved to win, that was obviously the goal, but I brought what I had tonight, and I brought what I had with the notice that I had.”

Now, she’s looking to show what she can do with proper notice. “I hope I have the blessing to be able to come back and see how it goes with an eight week fight camp,” she said of a future Bellator MMA fight. “I know that there’s so much more that I could have worked on with eight weeks, so I’d like that opportunity.”

She may just get it. It’s rare to see a losing fighter in a preliminary bout brought out for the media. But there was Dasch, standing tall Friday night despite the loss.

As to what she struggled with, “I think the biggest challenge was her ability to keep distance. My last opponent, and the opponents that I’ve had before that have not been as good with keeping that far away from me, where my left hand punch doesn’t connect.”

“That was something that kind of frustrated me, I wasn’t expecting it. So that’s something I definitely need to work on,” she observed.

Her good cheer after the loss certainly got noticed. “I always try to keep a high spirit. I love this sport. It’s my dream. I put college on pause to come follow this dream. So I love it, win or lose,” she said in way of explanation.

“You can’t be upset about the losses, just learn from them and keep moving forward.”

She was also careful not to let the moment overtake her. “I think this moment was perfect to me. I would go back and do it again even if I lost,” she admitted. “It was an amazing experience, I’m just really blessed to be here.”

In fact, she really would like to do it again. With Loureda, that is. “I’d love a rematch with her,” Dasch stated. “I want to prove that with an eight week camp, I can be much better than that. After that, whoever my manager, whoever Bellator, whatever fight they want to make me, whoever they think I should fight, I’ll give it my best.”

Watch the full post-fight press scrum with Larkyn Dasch from Bellator 222 above! 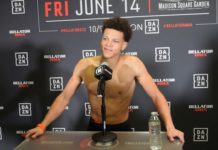