With both Henry Cejudo and Marlon Moraes making weight early, the main event for UFC 238 is official!

The UFC is back on PPV in the Windy City this weekend, as the promotion heads to Chicago with a pair of title fights topping the UFC 238 card. Henry Cejudo and Marlon Moraes meet in the main event, vying for the title vacated by the suspended T.J. Dillashaw. In co-main event action, meanwhile, Valentina Shevchenko will make the first defense of her women’s flyweight belt. In that fight, she’ll take on the resurgent Jessica ‘Evil’ Eye.

All fighters hit the scales Friday morning for the official weigh-in. And early on, both main event players hit the scales, and made weight. That means the main event is a go! Jessica Eye, meanwhile, was the last to weigh in — but hit the flyweight title fight limit of 125lbs, with the barrier. No fighters missed weight Friday, making the full card official! 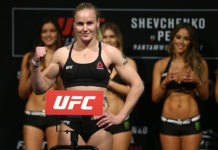