UFC San Antonio has beefed up its card with a lightweight showdown between Dan Hooker and James Vick, and a bantamweight scrap involving Ray Borg and newcomer Gabriel Silva.

Dan Hooker and James Vick are two of the taller 155ers you’ll see, with Vick coming in at 6’3″ and Hooker standing at 6’0″. Hooker moved up to lightweight in 2017 and subsequently went on a tear. The New Zealander rattled off four consecutive stoppages, with first-round knockouts against Ross Pearson, Jim Miller, and Gilbert Burns, and a third-round submission against Marc Diakiese. His run came to an end at the hands of Edson Barboza in December of last year.

Vick is also looking to find success once again, as he has lost two consecutive fights after starting his UFC career at 9-1. “The Texecutioner” saw his four-fight win streak come to an end when he was knocked out by Justin Gaethje in August 2018. He was unable to rebound four months ago, dropping a decision to Paul Felder.

Ray Borg will look for a stroke of good luck when he steps in the cage against Gabriel Silva. “The Tazmexican Devil” had three fights canceled in 2018 due to various issues including an eye injury that was a result of Conor McGregor’s bus attack at UFC 223, and his newborn son’s diagnosis with hydrocephalus. He then returned to the cage in March of this year, missing the bantamweight limit, and losing a controversial decision to newcomer Casey Kenney after having his opponent change twice in the month leading up to the fight.

Gabriel Silva made his US debut in a big way in March. He knocked out Jake Heffernan in the first round at LFA 63, which was attended by Dana White for his Lookin’ for a Fight program. Silva was signed backstage as an 8-0 Brazilian prospect, and now he’ll make his promotional debut in July.

As it stands, UFC San Antonio currently has 11 fights to its name, but none have been designated as the main event. Joining the two aforementioned bouts on the ESPN card is a heavyweight tilt between disgraced former NFL star Greg Hardy and up-and-comer Juan Adams. Top bantamweight contender Raquel Pennington will also return to the cage for the first time in 2019 to take on Irene Aldana. The event takes place on July 20 from the AT&T Center in Texas, the home of the NBA’s San Antonio Spurs. 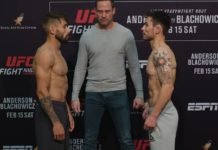