Movlid Khaybulaev showed the featherweight division that he is a name to look out for, knocking out UFC veteran Damon Jackson in just 10 seconds with a huge flying knee at PFL 2 2019.

Movlid Khaybulaev is an undefeated Dagestani fighter looking to take PFL by storm. At 13-0, Khaybulaev has five knockouts and one submission to his name. The Russian has fought primarily for FNG, but also has a decision over highly-touted prospect Herbert Burns in ONE Championship from 2017. “Killer” Khaybulaev was out of action last year although he was scheduled to fight twice.

Damon Jackson was briefly in the UFC from 2014 to 2016, accumulating an odd record of 0-1-1 with one no contest. Following the stint in the Octagon, “The Leech” went to LFA, going 7-1 with six stoppages. In his most recent fight, Jackson won by second-round knockout to win the promotion’s interim featherweight title. The Fortis MMA product has won by stoppage in his last five fights heading into his PFL debut.

Damon Jackson took the center of the cage, pushing forward, then Movlid Khaybulaev leapt in the air with a huge knee that crumbled Jackson. The Russian held back any follow-up punches, as Jackson was out cold face-first on the canvas.

😳 YOU NEED TO SEE WHAT FOLDED HIM LIKE THAT pic.twitter.com/KP9f7C9u3b

Jackson was able to walk off under his own power, not requiring a stretcher after a very scary KO. Khaybulaev earns six points in the standings and puts the entire featherweight division on notice in just 10 seconds. 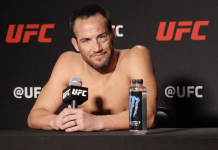 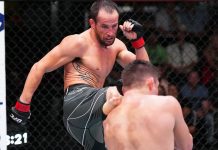 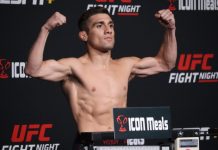 Welcome to the UFC: Dan Argueta