Say what you will about Sage Northcutt, but his spirit is seemingly intact despite a crushing (literally) loss in his ONE Championship debut.

Sage Northcutt’s debut at ONE Championship: Enter the Dragon did not go according to plan. The former UFC star, who the promotion did not come to terms with when he fought out his contract, signed with the Asian MMA powerhouse late last year.

Dana White trumpeted the line that Sage needed to get some experience outside the promotion, the same argument he made against signing Ben Askren straight from Bellator. Whether or not you agree, the fact remains that Northcutt left the UFC on a three-fight win streak, and was 6-2 overall in the promotion. Undefeated at lightweight as well.

And so Northcutt was expected to do big things in ONE, because, well, UFC.

Perhaps we overvalue those initials. Matched up against a striking expert in Cosmo Alexandre at Enter the Dragon, Sage Northcutt was knocked out, face planting in 29 seconds in his debut.

Now, Northcutt has shared a photo of the aftermath of the knockout, which resulted in eight fractures and nine hours of surgery.

Keep in mind, Northcutt is just 23 years old. He may take heat for his good looks and quick career path in the UFC, but he is, no doubt, a fighter. And was in good spirits despite the nine hour operation. “I’ll be back! Next post is catheter removal… stay tuned” he quipped, before adding a “JK” (just kidding) for those getting their hopes up. 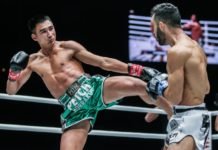 Giorgio Petrosyan vs. Petchmorrakot Petchyindee Result at ONE Championship’s Enter the Dragon Overturned