Desmond Green knew his home town would come out to support him at UFC Rochester, but even he was blown away by the reaction he received.

Rochester, NY — Desmond Green promised he’d get a good turnout at UFC Rochester. The only Rochester native on the card actually had to beg to get on it, and it’s a good thing he did. He had the biggest cheers, the most support, save perhaps for the main event. And in terms of media attention, Green was second to none. Every TV and radio station in the city turned out to cover Green, and just Green for the most part.

Which meant that the back stage area following Green’s win over UFC newcomer Charles Jourdain was crowded. The local media got in position immediately following his win, circled around the interview area like hawks. Clearly unaware how long it takes a fighter to clear the commission following a bout.

It didn’t matter. Their guy had won. Green was one of the biggest stories of the night. Hometown hero triumphs. The Rush–Henrietta High School grad and University of Buffalo alum went the distance against the scrappy Jourdain, then got his hand raised.

Speaking to reporters including Cageside Press after the fight, he admitted that “the roar that I got from that crowd, I had no clue it was going to be that big.”

“I knew there was going to be a roar,” he said, but “I could literally feel the vibrations through my body as they were roaring.” The turnout certainly made it a night to remember. “I’m just like, in my head I’m like ‘this is for me? Little ol’ me? I love you Rochester but damn I didn’t know you was all gonna come out like this!’ I’m going to be dreaming of this night for the next couple of weeks.”

The final seconds of the fight saw Green on his heels, Jourdain charging forward looking for a late finish. “Those last ten seconds, it looked like I was running away, but I was just so happy, I was like ‘just get away from me guy, get away, I won, just get away from me.'”

“I just wanted to finish it out,” Green said. “It was great.”

Encircled by reporters, ‘The Predator’ admitted that he’d never seen so many cameras before. “No and I love it. I love the cameras. It’s just crazy.”

“It took me five years to get to the UFC,” he recalled. He was nearly 25 fights into his career before he finally made it to the big show. “That’s some guy’s career. But I never, not once was I discouraged. Last year was one of the roughest years inside and outside the octagon of my life. My manager [Glenn Robinson] dying, the car accident I got in, I lost two fights in a row. But I stayed faithful, and I got rewarded for it.”

Opponent Charles Jourdain pushed Green further than expected Saturday night, and Des was certainly complimentary afterward. “Hat’s off to Charles. I didn’t take him lightly at all, but I will say he brought a lot more than I thought he would bring,” Green said. “I was hitting him with some hard shots, and he never backed down, he was always moving forward. He had a gas tank on him. I knew wrestling was his weak point, but it was stronger than I thought it was.” Jourdain, explained Green, didn’t concede to the takedowns, threw up submissions in defense, and continually escaped.

So, continued Green, he sees a future for the Canadian. “He’s light for 155. He’s going to be going back down to 45 I heard, and I really think he’s going to have success there. Hat’s off to Charles, thanks for taking this fight, without him I wouldn’t be able to fight in Rochester. So hat’s off to him again.”

As for what fighting at home meant to Green, aside from the economic boost the show will bring the city, “I hope I showed them that kids can dream. In Rochester, we only have a couple of professional athletes. I’m one of the only people actually from from Rochester to make it to the UFC. So I hope more kids do it, I hope more kids jump into the sport, it’s an ever-growing sport.”

For Green, it’s Hard Knocks 365 in Florida that has helped him grow, personally. “It’s brought my game to many, many different levels. We got some of the best guys at our gym.” That, of course, includes welterweight champ Kamaru Usman. Not to mention fellow UFC Rochester winner Vicente Luque, retired but still training Rumble Johnson, and ex-champ Robbie Lawler. “And we all push each other. Sparring days in that room, you could sell tickets to.”

Moving forward, Green is looking for a high level guy. And he’d like to make some travel plans. “They’re going to Australia in October or something, I’ve always wanted to see a Kangaroo. I have a thing for Kangaroos,” he exclaimed. “I always wanted to see one, so Sean Shelby, thanks for putting me on this card, if you want to put me on the Australia card, I’d be more than happy to go out there and perform.” 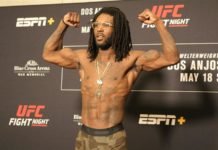 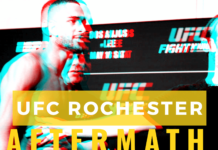