Rafael dos Anjos provided a rude welcoming to the welterweight division for Kevin Lee at UFC Rochester, submitting him in the fourth round of an absolutely grueling contest.

Rafael dos Anjos had a long road to the title, debuting in the UFC way back in 2008. The Brazilian went 12-5 with wins over Donald Cerrone, Nate Diaz, and Benson Henderson to earn a title shot in 2015. RDA dominated then-champion Anthony Pettis to win the title and defended it once against Cerrone with a first round KO. Subsequent losses to Eddie Alvarez and Tony Ferguson sparked a move to welterweight for dos Anjos, and he made an impact immediately. RDA won three straight fights including a win over former champion Robbie Lawler. He was given an interim title shot as a result, but fell to Colby Covington, followed by a loss to current champion Kamaru Usman.

Kevin Lee will be making his welterweight debut at UFC Rochester. The wrestler was signed by the promotion in 2014, but lost in his debut to Al Iaquinta. Lee then rattled off nine wins in his next 10 bouts, with victories over Michael Chiesa and Francisco Trinaldo to earn an interim title shot against Tony Ferguson. After knocking Ferguson down in the first round, Lee was eventually submitted. “The Motown Phenom” bounced back with a win over Edson Barboza, but lost in his last fight in a rematch with Iaquinta, prompting a move up in weight.

The pair traded kicks to start the fight, and they were throwing bombs at each other early. Lee caught dos Anjos with a left that knocked him down and pounced to his back. RDA defended well, peeling Lee off of him. The heavy leather continued to be exchanged until Lee drove in for a takedown against the fence. Lee worked hard for the takedown, but RDA resisted well. After minutes against the cage, dos Anjos broke free, then turned the tables and scored a takedown with 30 seconds left.

Lee ate a body kick early in the second round, shot for a takedown and found himself in a guillotine. Lee lifted dos Anjos and slammed him to the ground to escape the grip. Dos Anjos stood up and defended another takedown attempt. Lee rebounded by pressuring dos Anjos with strikes into another clinch, but the Brazilian’s takedown defense was on point. The pair separated and exchanged heavy blows, but Lee stopped that with another failed takedown attempt.

The kicks were coming hard from RDA and Lee began to tire. Dos Anjos landed a takedown into side control in the middle of the Octagon. Lee turned over to all fours and was able to stand, but RDA hung on and went for another takedown. Lee reversed the takedown and had dos Anjos’ back temporarily, but RDA slipped out, then took the back of Lee. Lee stood up, and dos Anjos brought him down again, setting a new record for takedowns against Kevin Lee with four. Lee was able to get up and score a takedown of his own. Dos Anjos did the same thing, but had his back taken in the process. RDA spun out and ended the round pushing Lee against the cage.

The championship rounds began and RDA seemed like the fresher fighter. After an exchange punches, both fighters threw kicks at the same time, and Lee’s caught his opponent below the belt. There was a brief pause in action, then RDA landed a heavy leg kick that wobbled Lee. Lee rebounded with a takedown attempt, but dos Anjos defended yet again. Lee shot in hard for another takedown, couldn’t get it, and fell to the canvas. RDA pounced on his back, got to full mount, then secured an arm-triangle choke that forced the tap from Lee. 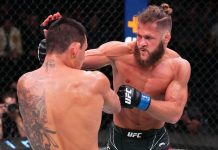