After battling through some adversity early, Vincente Luque earned his fifth stoppage win in a row at UFC Rochester against Derrick Krantz.

Vicente Luque started his career with a 7-4-1 record and six stoppages, earning a spot on The Ultimate Fighter. He went 1-1 on the show and lost in his UFC debut. Since then, however, he’s been on an absolute tear. Luque is 8-1 since the loss with eight stoppages and the one loss coming to current contender Leon Edwards. The Brazilian-American has won four straight fights with his last fight being a Fight of the Year candidate against Bryan Barberena.

Derrick Krantz is stepping up on less than a week’s notice to take on the fearsome Luque. Krantz is a 34-veteran with multiple fights against UFC and Bellator standouts like Derek Campos and Dustin Poirier among others. “D-Rock” has won six of his last seven fights, with the last two coming by knockout.

Round one started with a flurry by Krantz, as he hit Luque clean with a hard right uppercut. He then got a takedown after a failed guillotine by Luque. Krantz then began to look for submissions, first by getting Luque’s back and looking for the rear-naked-choke, and then after that fell through he looked for a guillotine from the bottom.

However both submissions would fail, and the two would return to the feet. Not long after returning to the feet, Luque hit with Krantz with a big knee and a left hand that would drop the Texan. He would swarm with ground and pound, and that was all she wrote.

Good win after some adversity from Luque. This is now his fifth win in a row, all by the way of stoppage. 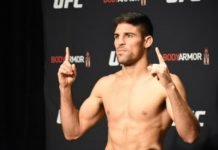