Announced on the KSW 49 broadcast, Wembley Arena in London is set to be the destination for the Poland-based promotion’s milestone event; KSW 50.

This will be the third time KSW have been to London, England. KSW 32 and 45 both took place in the Wembley Arena, headlined by Philip De Fries vs. Karol Bedorf and Peter Graham vs. Mariusz Pudzianowski.

De Fries last fought against Narkun at KSW 47, which saw the light heavyweight champ move up and attempt to claim a second title. Narkun came up short, however, with De Fries earning a unanimous decision. The win was the English fighter’s second defense of his KSW heavyweight title. He has now won five straight bouts, including all three fights in KSW, and a single fight in Bellator against James Thompson.

Expect bouts for KSW 50 to be announced over the next couple of months, as the event is still a fair distance away. In the meantime, KSW 49 is currently unfolding in Gdansk, Poland, topped by a main event of Scott Askham vs. Michel Materla. 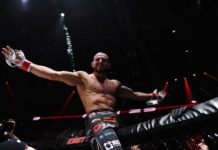