A smart game plan focusing on attacking his opponent’s legs led to Warlley Alves picking up a third round finish of Sergio Moraes at UFC 237.

At welterweight on Saturday at UFC 237, TUF Brazil 3 winner Warlley Alves looked to bounce back from a loss to James Krause. He’d face off with another Brazilian, Sergio Moraes, who entered the night off a loss to Anthony Rocco Martin. Both fighters were 2-2 in their last four. Both wanted to avoid a losing streak.

Alves opened with a kick that left him off-balance, but so early in, Moraes wasn’t about to jump on the error. Alves was certainly relying on his kicks early, but as the round progressed, Moraes got his hands going. Despite that, the leg kicks of Alves were continuing to have an effect. Alves began targeting the body as well, on both sides. Moraes was already stepping gingerly with his lead leg, and it was still the first frame. Not a good sign. Moraes began to make it a point to check any kick he could, but the damage was done.

Once again in the second, Warlley Alves opened with his kicks. Sergio Moraes was being backed up against the fence. The takedown didn’t seem to be an option due to the damage incurred by Moraes’ lead leg, which limited his options. Move in, get kicked. Think takedown, get kicked. Alves was taking bigger and bigger swings on his leg kicks. Moraes had no answer for them. If he wanted to leave Rio with a win, something was going to have to change in the third.

To open the third, Alves went to the body with a punch, hurting Moraes. Moraes was backing up, and looking spent. He soon found himself trapped against the cage; Alves attempted a jump knee, but didn’t land clean. That would foreshadow the finish, however. Later in the round, another jump knee from Alves did connect. Moraes was stunned, some follow up strikes sealed the deal, and Warlley Alves had the finish! 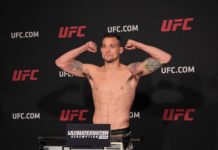 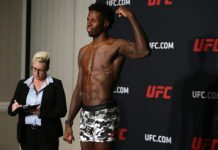 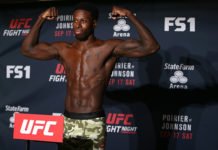