Tywan Claxton returned at Bellator 221, with ‘Speedy’ (or Air Claxton, if you prefer) taking on James Bennett. Claxton was an undefeated and promising prospect for Bellator, part of a youth movement Scott Coker and co. had been building over the past several years. He also had the distinction of being likely the only app developer on the Bellator roster, uniting the tech world and the fighting world. The fight went down Saturday at the AllState Arena in Chicago.

Claxton opened with a front kick, staying low, circling. Bennett connected to the body with a kick, the most significant strike of the opening minute. Yet a clinch led to Claxton taking his opponent down; he moved to half guard, but Bennett scrambled. A fun sequence saw Claxton sneaking some punches in under Bennett from the back. Bennett worked his way back up, only to be taken down again. Bennett attempted to defend with a choke, but Claxton pulled free. Some heavy lefts landed on Bennett, whose arm was trapped. While Bennett would escape up, another big takedown by Tywan Claxton sent him crashing back down. Ground n’ pound followed from guard, as Claxton rained down blows.

Round two saw Claxton firing off a head kick attempt, which Bennett was able to evade. Then, Air Claxton launched a flying knee! It didn’t land clean, but it sent Bennett crashing to the canvas, Claxton landing on top. Some heavy blows followed, and Bennett was in a nasty spot. Elbows, punches, everything Claxton threw seemed to make an impact. Bennett toughed it out, but over half the round was remaining.

‘Hey what up, 50!’ Claxton hollered while working Bennett over, as rapper 50 Cent was seated cageside.

Claxton then went back to landing elbows and punches, trapping his opponent’s arm briefly. What wasn’t happening was a finish, as Bennett was moving just enough to avoid having the fight stopped. Toward the end of the round, Bennett made it back up, and they headed to the final frame.

Claxton changed levels and scored a takedown early in the third, but he briefly regretted it, as Bennett locked in a choke. Staying clam, Claxton worked free, briefly mounted, then worked in elbows and hammer fists from half guard. After taking a good look, the ref finally waved it off, curiously when Bennett was in less danger than he had been moments earlier. That said, the winner was never in question, so at worst, the ref saved Bennett from taking some extra damage. 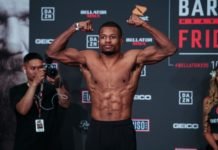 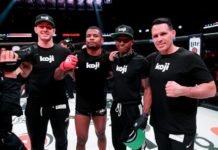 Bellator USO’s Tywan Claxton On Changes After Sanchez Loss: “I Debugged My Training” 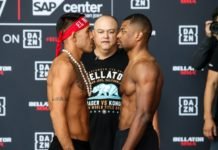