Juan Adams is an outspoken and undefeated 27-year-old heavyweight taking his second walk to the Octagon tonight. After three first-round knockouts to start his professional career in LFA, “The Kraken” was invited to the Contender Series. The Texas native took advantage of the opportunity, winning by first-round knockout again and earning a UFC contract.

Adams won in his promotional debut in December, this time reaching the third round for the first time in his career before knocking out Chris De La Rocha. Check out our interview with the heavyweight here.

Arjan Bhullar is an international level wrestler who represented Canada at the 2012 Olympics, falling in the first round of his tournament. He also took home gold at the 2010 Commonwealth Games. The heavyweight started his career 6-0 with four stoppages. He is 2-1 in the UFC, defeating Marcelo Golm in October.

Adams pops Bhullar with a jab to start the action. Bhullar slides inside the pocket and hits Adams with a short hook. The Kraken follows up with a flurry of shots. He stalks Bhullar but gets stuck with two hard jab.

They clinch and both fire off knees. They briefly break but clinch again and the Indian fighter cracks Adams with an uppercut and a knee on the break. Adams misses a jab, but they clinch. When they clinch, Adams lands a jab but gets tagged with one in response from the Olympic wrestler.

They clinch and both fighters land some heavy shots. Adams presses Bhullar against the cage and works the body with a knee. They break and Adams presses forward.

They clinch once again and break without much action. It is starting to be a broken record with a clinch and then break. In the clinch, Bhullar hits Adams with two knees and the round comes to an end. Very close round that could go either way.

Cageside Press scored the round: 10-9 Adams

Adams back Bhullar up with a jab and then explodes on him with a volley of punches. They clinch and Bhullar cracks the American with an uppercut. From the break, the Olympic wrestler grabs a snatch single. He runs the pipe and takes Adams to the canvas.

Bhullar knocks Adams mouthpiece out with an elbow while sitting in Adams half guard. Adams suddenly explodes to his feet and bumps Bhullar off of him and is able to get to his feet.

The two clinch and reverse positions against the cage. When they break, Adams presses the action popping a jab and backing Bhullar up. He hits his foe with a short left hook.

Bhullar clinches with Adams and presses him against the cage. Adams mouthpiece falls out as the round comes to an end.

Another close round, but the takedown gives Bhullar to round.

Cageside Press scored the round: 10-9 for Bhullar

Adams opens the round with firing big shots, backing Bhullar up. They exchange jabs and then right hands. The Indian clinches and presses Adams against the cage. Both fighters look tired as they pummel for the position.

They break and Bhullar lands a short hook but is back up by another uppercut from Adams. They clinch against the cage and Bhullar takes Adams down with a snatch single leg.

Sitting in the half guard, Bhullar hits Adams with some small pot shots while keeping Adams back on the canvas as the round ends.

Another very close round, but Bhullar’s top control might give him the round.

During the post-fight interview, Bhullar calls for a fight with the former heavyweight champion, Andrei Arlovski. 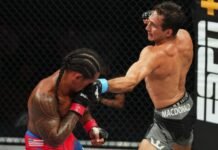