Court McGee and Dhiego Lima battled it out for three full rounds to open up UFC Fort Lauderdale on Saturday night in the sunshine state.

Court McGee was the winner of the 11th season of The Ultimate Fighter. After losing in the first round of the show, McGee re-entered the tournament to replace an injured competitor. McGee went 2-0 in the tournament, including defeating Brad Tavares to reach the finals. “The Crusher” won his first three fights in the UFC, including the TUF Finale. Since then, he is 5-6, but holds a win over middleweight champion Robert Whittaker. Most recently, McGee snapped a two-fight losing streak with a win over Alex Garcia in October. He returns at UFC Fort Lauderdale, facing Dhiego Lima.

Lima, the brother of former Bellator champion Douglas Lima, was a finalist on the 19th season of The Ultimate Fighter after winning by submission twice. His success did not carry over to the UFC, going 1-3 and getting cut in his first stint. Lima then went 2-1 outside the Octagon, winning the Titan FC welterweight title and getting invited on the Redemption season of TUF. Lima reached the finals again, going 3-0 on the show. The Brazilian lost to Jesse Taylor in the finals but is 1-1 since then, knocking out Chad Laprise in his last appearance.

Lima stayed on the outside early, and connected a couple of times in the opening minute. McGee stalked him, getting in a few shots of his own. The pair would exchange several times, with Lima’s left hand being a threat. He’d land it several times, including a solid connection near the midway point of the round. McGee was eating punches coming in, with Lima’s counter game serving him well. That finally forced McGee into a takedown attempt, but Lima fought it off. Later, in the final minute, McGee would look for another takedown, and pulled off a rather nice throw, leading to the pair going down — if only briefly. The round ended with McGee looking to get Lima down, to no avail.

Round two continued to back-and-forth on the feet, with less thought of a takedown. McGee mixed in some leg kicks, but Lima seemed to be ever so slightly ahead. He continued to counter, move out of range, and generally forced McGee to come to him. The in-and-out proved rough going for McGee, although Lima was a tad less active in the second compared to the opening round. Lima finished the round looking for his own takedown.

McGee threw a kick upstairs early in the third, while Lima went to the body. Court McGee shot for a takedown in the first minute of the round, but Lima easily fought it off. McGee was showing a bit of damage around the eyes at this point, while Lima looked to have a little left in the tank. That said, it was a relatively close affair, and McGee was certainly not out of it. Not unexpectedly, he turned it up towards the end of the bout, and scored a knockdown in the final seconds! But would it be enough? Not in the end. 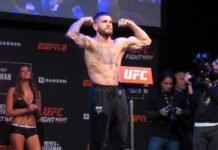 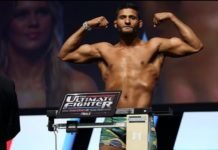 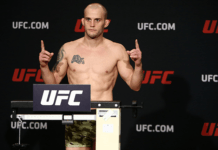