Going to the judges is always a dicey prospect on foreign soil, but Roxanne Modafferi did enough to get the nod against Antonina Shevchenko at UFC St. Petersburg. She also made a little history in the process.

Antonina Shevchenko, the sister of flyweight champion Valentina Shevchenko, is looking to extend her undefeated record to 8-0 at UFC St. Petersburg. “The Panther” appeared on Dana White’s Tuesday Night Contender Series last year, winning with a second-round TKO set up by knees. After starting her MMA career in 2002 and running up a 3-0 record, Shevchenko committed to kickboxing and Muay Thai before returning to MMA from a 12-year layoff in 2017. Shevchenko defeated Ji Yeon Kim in her UFC debut in November.

Roxanne Modafferi started her MMA career in 2003, but has been participating in the sport ever since unlike Shevchenko. “The Happy Warrior” fought for a multitude of promotions (including a Strikeforce title shot) and had a 15-10 record when she joined the cast of the 18th Ultimate Fighter season. After going 1-1 on the show, she earned a Fight of the Night in the season finale against Raquel Pennington. She then went 6-2 outside the UFC to earn another TUF shot. Filling in for Sijara Eubanks, Modafferi fought for the inaugural UFC flyweight championship, coming up short against Nicco Montano in a Fight of the Night. The Delaware native is 1-1 since then.

Modafferi worked her jab and was moving constantly in the opening minute of her flyweight fight against Shevchenko. Shevchenko fired off a number of kicks high, but it was a straight left that connected flush, signaling who would have the edge in striking — as expected. Shevchenko was finding plenty of success with her counters, while Modafferi constantly pressed forward, landing several strikes of her own. She finally closed the distance, driving Shevchenko into the fence, looking for a takedown. Shevchenko was able to power up, only to be dragged down once more. Then again. Modafferi came very close to moving to mount, and finished the round on top. Not a lot of damage despite the position, but she likely did enough to win the round.

Shevchenko came out more aggressive in round two, landing on Roxy several times. After a minute on the feet, Modafferi went back to the well, closing the distance and looking for a trip takedown by the fence. She would eventually drag her opponent down, landing in half guard. She looked to make space, and eventually backed up, barely avoiding some upkicks before re-engaging on the ground. Toward the end of the round, with about three minutes of top time for Modafferi, she managed to land a few elbows, but again, couldn’t fire off much in the way of significant strikes.

With Modafferi up in takedowns and control time, and total strikes, but Shevchenko close with significant strikes, the third round became crucial.  Shevchenko once again came out firing fast and furious in the third, but nearly had a kick caught. Modafferi was under fire, however, and on her heels. However, she grabbed on to a leg and pulled Shevchenko down, then took the back, getting one hook in. However, Shevchenko was able to reverse, getting on top in guard. That didn’t last long, as Modafferi reversed, sweeping to mount and dropping elbows and punches. Shevchenko worked her way back to the fence, leading to a scramble, with the pair getting back up with just over 90 seconds remaining. Modafferi would begin pressing for another takedown, while Shevchenko fired a few knees. A final takedown from Roxy saw her land in guard, and she finished the fight on top.

The fight going the distance was going to test the competence of the judges, with Modafferi clearly doing enough to get the nod. In the end she took home a split decision, in what was the first ever women’s UFC fight in Russia. A little bit of history for the veteran fighter. 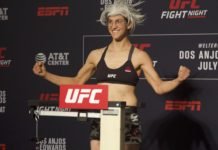 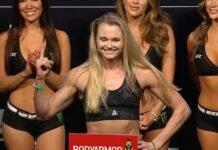 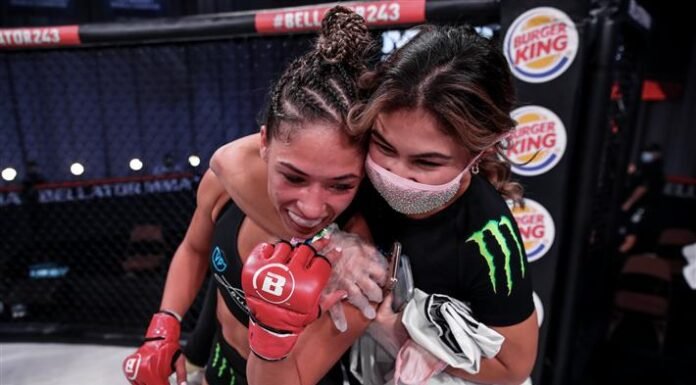