Brave CF 23 delivered on the entertainment front with three new title-holders for the promotion.

Brave CF returned for our viewing pleasure for the 23rd time. We have your full results for the card which was on FITE TV. Brave CF 23 featured three title fights as well as the debut of Jose “Shorty” Torres in the promotion. The former UFC flyweight takes on Amir Albazi opening up the main card.

The first title fight is a lightweight showdown between Abdul-Kareem Al-Selwady and Luan Santiago. The 165ers take the co-main spot as Eldar Eldarov takes on Mounir Lazzez. The main event gets us Jarrah Al-Silawi attempting his first title defense against Russia’s Abdoul Abdouraguimov.

The card turned out to be a BANGER. With wild knockouts all over the place, BRAVE CF 23 did not disappoint anyone. Check out the results below! 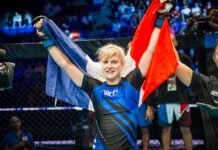