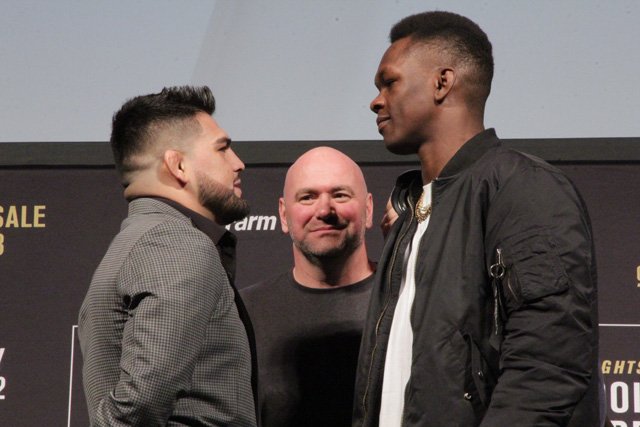 Kelvin Gastelum has had to wait several extra months to fight for a piece of the middleweight title, but will Israel Adesanya be the one to ascend to the elite level at UFC 236?

Tell me if you’ve heard this story before. Kelvin Gastelum, a surging and capable mixed martial artist, is the underdog against vaunted striker who has captured the attention of the MMA world and the two will compete with one of the sport’s biggest prizes on the line. With Robert Whittaker sidelined, Gastelum is now pencilled in to face one of the premiere strikers in the world in Israel Adesanya with a chance to become the interim middleweight champion at UFC 236.

Can @KelvinGastelum top it in Saturday's co-main event?! #UFC236 pic.twitter.com/3ItLERoFtk

It will be eleven months since Kelvin Gastelum was in the cage, and yet the twists and turns have made it feel like much longer. After roughly two weeks in Australia, he went home without ever having laced up the gloves against an opponent. Gastelum voiced his displeasure, raising teammate Henry Cejudo’s championship belt and stating that the UFC should strip Whittaker and make him the champion. Under the circumstances, he has gotten very close to his wish. Had he defeated Whittaker, Adesanya in all likelihood would have been the next opponent he faced this year.

Saturday’s match-up is exactly the one that originally introduced him to the masses. If he wins on Saturday, it will be beautiful symmetry as it will be nearly six years to the day that Gastelum upset Uriah Hall when the latter appeared unstoppable en route to The Ultimate Fighter Finale in 2013. Since then, he’s put together victories over the likes of former champions and top contenders like Michael Bisping, Jacare Souza, and Johny Hendricks. Handing Adesanya his first loss would assert that he is the biggest threat at 185 and make the eventual match-up with Whittaker even more anticipated than it was in February.

Israel Adesanya spent the last year and a half making himself the next big thing in mixed martial arts, a mission he has thoroughly accomplished. “The Last Stylebender” posted four wins in his first year in the UFC and opened 2019 with a victory over former champion Anderson Silva. A former kickboxer with a 25-5-1 record, Adesanya was also awarded the Breakthrough Fighter of the Year award in 2018.

Outside of his skills, Adesanya has proven himself to be an adept self-promoter. UFC 234 was seen by many as a two-fight card and Australia lost their native champion in Whittaker at the eleventh hour. And yet, the event remained a sell-out on the back of Adesanya and Silva, who many acknowledged was past his prime. Many feel that a fight between himself and Whittaker in either Australia or New Zealand would be the type of massive event that would warrant an outdoor stadium. If he were to complete such a campaign in 2019, it would set him up for pay-per-view stardom going forward.

The co-main event is ready!

Will 🇺🇸 @KelvinGastelum or 🇳🇬 @StyleBender walk away with the win in this MW interim title fight?

Gastelum will give up a lot of height and reach against Adesanya and will have to close the distance with one of the premiere strikers in the game today. It is a tall order for the former Ultimate Fighter winner but the key will be to stay aggressive in the face of Adesanya and use a varied attack. Feints will be huge to hide his entry into striking range but he will also need to threaten with takedown attempts to make himself more unpredictable. A battle in the center of the Octagon at mid-range is not one Gastelum figures to win so he must be relentless in coming forward with pressure to neutralize the attack of the New Zealander.

Adesanya has proven that he is one of the most impressive strikers in MMA and has shined against tough opponents who looked to smother him with pressure and take away his range. However, he will now need to prove that he can do the same against elite competition. As in his fights with Derek Brunson and Brad Tavares, Adesanya should look to use an accurate and varied attack when Gastelum is looking to close the distance. Because of the threat of the takedown, Adesanya should look to establish a jab and kicks should be kept at a minimum and all aimed at the calf.

The winner will set up a fight with undisputed champion Robert Whittaker who is expected to be ready in the latter half of 2019 following health complications in February. They will likely headline a card against Whittaker in the fall however an Adesanya victory could see the UFC consider stacking a pay-per-view event in Australia or New Zealand to capitalize on their star power in the South East.