Years after their first meeting, Max Holloway and Dustin Poirier will meet again at UFC 236 with a chance to win the interim lightweight title and set up the biggest fight of 2019 against Khabib Nurmagomedov.

The year was 2012.  The event was UFC 143.  The UFC was just one event into the FOX deal.  Conor McGregor and Ronda Rousey had yet to set foot in the Octagon.  Nick Diaz was set to face Carlos Condit for the interim welterweight championship later that evening.  About two hours earlier on the prelims, surging contender Dustin Poirier was welcoming the youngest fighter on the UFC roster, Max Holloway, to the promotion.  Poirier rolled through Holloway quickly, submitting him in the first round and sending both on their way with their respective careers.  On Saturday, they meet again under the most unique of circumstances with gold on the line at UFC 236.

He called his shot!

We rewind to #UFC231 when @BlessedMMA displayed his pace in round four! #UFC236 pic.twitter.com/URV5z4BS3H

Featherweight champion Max Holloway was only five fights into his career when he made his UFC debut against Poirier.  Today, he is widely considered one of the greatest talents in the sport who is riding a twelve fight win-streak that reads like a murderers row of featherweight contenders.  The consensus Fighter of the Year in 2017, Holloway is at the height of his powers going into the rematch.  He won the UFC featherweight title and defended it with back-to-back wins over the legendary José Aldo.  Then when he appeared at his most vulnerable, coming off injuries and mysterious ailments that kept him out of action a full year, he came back to dominate a formidable threat in Brian Ortega.

A victory for Holloway would turn the MMA world on its axis.  Featherweight contenders like Zabit Magomedsharipov, Frankie Edgar, and Alexander Volkanovski would all fall by the wayside as the world would clamor to see if Holloway can dethrone Khabib Nurmagomedov and become a two-division champion.  In eliminating Poirier and Nurmagomedov, along with his current UFC resume, Holloway in twelve months could conceivably cement his place as one of the greatest in MMA history.

To jump that far ahead, however, would be committing the crime of underestimating Dustin “The Diamond” Poirier.  Entering the UFC at a young age himself at 23, Poirier has been a perennial contender in two weight classes for nearly all eight years that he has been with the company.  His finishing rate, whether on the feet or on the ground, in incredible.  His current win-streak is easily his best to date and he has posted consecutive finishes of top contenders and former champions in Anthony Pettis, Justin Gaethje, and Eddie Alvarez.  A win over Holloway would be the ultimate icing on the cake and give him the kind of momentum to make a fight with Nurmagomedov the biggest match of 2019.

Heart of a 🦁.@DustinPoirier is hunting for his fourth straight finish and the strap. #UFC236 pic.twitter.com/0g9yQaZDfs

For all his success, Poireir’s setbacks always seemed to occur in emphatic fashion every time he was poised to turn the corner.  Losses to Conor McGregor, Michael Johnson, and the Korean Zombie each occurred right when it seemed Poirier would be considered an obvious title contender with a victory.  It was a trend, one of the worst an athlete could have in their career.  But the last year and a half has appeared to finally vanquish the issues that previously hampered him.  His level of opposition has been incredible, and he’s even rallied back in key moments to win those bouts.  The biggest testament to his success is the fact that the MMA world has unanimously agreed that Poirier was being slighted if he were booked against anyone outside the top three after his campaign last year.

The offensive firepower between the two is incredible and the fight promises to deliver plenty of violence for as long as it lasts.  Holloway’s ability to overwhelm with volume while avoiding damage is incredible and he figures to look to do the same to Poirier.  Most importantly, he must avoid being stationary when Poirier sits down to counter.  Poirier possesses fight ending power and Holloway must avoid staying in the pocket as well as check leg-kicks.  Further, he will want to stay in the center of the Octagon to avoid being neutralized against the fence.

Of the two, Poirier figures to be more capable of finishing fights with one shot and he should look to exploit that with a multi-faceted attack.  As Holloway tries to maintain the distance, Poirier should use leg-kicks to hamper his mobility and make him an easier target to hit.  Cutting off the cage will be crucial in terms of getting close to throw strikes or to push Holloway into the fence where he can initiate the clinch.  Poirier also has a dangerous ground game and he should commit time each round to getting Holloway to the mat.  Regardless of whether he gets a takedown, Poirier will benefit from having Holloway hesitant to engage if he feels he will be taken to the mat.

There is plenty of talk about when and where Khabib Nurmagomedov will return, with the two most likely dates being in September or November at Madison Square Garden.  Short of a heartbreaking turn of events, the winner of Holloway and Poirier will welcome him back to the cage regardless of where Conor McGregor or Tony Ferguson stand at that time.  For either Holloway or Poirier, the momentum of a victory on Saturday will make the fight with Nurmagomedov the biggest fight of 2019. 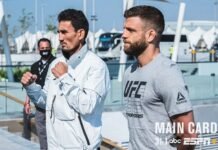 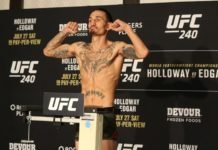 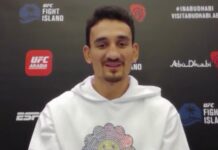