Bellator 219’s Andrey Koreshkov had to dance before he could fight, but his odd start in combat sports has seen him become one of the promotion’s top welterweights.

Andrey Koreshkov is, without question, one of the most dangerous welterweights in Bellator MMA. A former champion, who has gone toe-to-toe with the likes of Ben Askren, Douglas Lima, Benson Henderson, and others. He returns this Friday at Bellator 219, though it’s not the fight he was originally booked for. Koreshkov was supposed to face another high-profile opponent in Lorenz Larkin, but Larkin withdrew from the bout due to injury.

Instead, Koreshkov now returns to action against the unheralded Michael Jasper. He’s no longer the main event, that honor having been given to Saad Awad vs. Brandon Girtz instead. For a fighter like Andrey Koreshkov, however, a little adversity doesn’t matter. In fact, adversity is how he got into the sport.

Well, that, and ball room dancing. Because you have to dance before you can fight. At least he did.

“I always wanted to do some combat sports because I was bullied a lot as a kid in my neighborhood, because of the way I looked,” Koreshkov told Cageside Press via translator ahead of Bellator 219. Koreshkov, it seemed, wasn’t Russian-looking enough for the other kids growing up. So he turned to sports, but his parents had other ideas.

“I think it was some kind of manipulation that my parents did on me,” he recalled. When it came to fighting, “they basically said okay, but first you have to learn how to dance and then you will learn how to fight.”

So he did. Ball Room Dancing would give way to fighting. “My first combat sport was literally combat fighting, it’s a pretty regular type of sport in Russia, it’s like amateur MMA.” It’s worth noting that the approach paid off. Koreshkov, later in life, would earn gold at the 2010 World Combat Games in Pankration, and the bronze medal at the 2013 Russian Hand-to-hand Combat Championships.

Eventually, Koreshkov would wind up training with another fighter who would go on to become a Bellator MMA champion, Alexander Shlemenko.

“That was a very important step in my career, when I met Alexander.” he recalled. “Back in the day we lived in the same city but were training in different gyms.” Around the time Shlemenko was getting ready for a fight in Brazil with Jose Landi, the gym he was training at closed. “My coach, he invited Alexander to join us for a long period of time. Back then I was like 14, 15 years old and I was maybe too young to, you know, be a good sparing partner but at the same time I tried to help him every way I could.”

They’ve been training together for years now, of course. And while Koreshkov has a fight coming up, it’s still easy to look back. Ben Askren just made his UFC debut against Robbie Lawler, a fight that ended in some controversy. Koreshkov, a former opponent of ‘Funky,’ was watching.

“Of course I watched that fight and I think Robbie Lawler did great in that fight. It was a great slam and he was pounding Ben on the ground,” Koreshkov said. “I thought the fight was just about to be over but Ben is a very, very courageous guy, you got to give him that. All he needs is just to get a hold of you somehow, and once he gets a hold of you it’s really difficult to get separated from him.”

In short, Askren did what he was supposed to do, but Koreshkov also feels that “the referee that fight, he really screwed up big time. I think he just basically gave a win to Ben, I think it was a referee mistake and a big one.”

Another past opponent also has Koreshkov’s eye, Douglas Lima. Lima is up in their career series, 2-1, and bounced the Russian from the Bellator welterweight grand prix.

“I would really want to rematch [Lima] because I feel like Douglas Lima is one of the strongest fighters at welterweight in Bellator right now,” Koreshkov told us. “He beat me twice and I only beat him once, I want to change that, I want to beat him again.” Then there’s Lorenz Larkin, who pulled out of Bellator 219.

While Larkin is a fight Koreshkov would no doubt also like, he has to focus on Mike Jasper. Frankly, Koreshkov is just happy to still have a fight. “When I learned that Lorenz Larkin [wouldn’t] be able to fight and that I have a different opponent, all of my preparation was almost over, and back then I was just doing what I would call technical preparation for a particular opponent.”

“I’m glad that I’m still fighting on this card, that the fight wasn’t just cancelled,” said Koreshkov. “If that would have happened then it would mean that my whole preparation was for nothing, but I’m still fighting on this card and so I still consider this, given the circumstances, this is not the worst outcome. So now I have a goal in this fight to just basically try to do everything perfect, and work on all of the mistakes I’ve made in the past and use this opportunity just to improve myself.”

As for future opponents, while Koreshkov can’t be certain, “it could be Lorenz Larkin when he gets better, once he’s cleared to fight after his injury.” He does recognize the depth of welterweight in Bellator, saying  “they have a lot of really good prospects and they have some guys who also have name recognition.”

There’s always a chance of fighting in Russia for Bellator some day as well. There has been talk about a potential farewell tour for Fedor Emelianenko, with stops in the USA, Japan and Russia. If that were to happen, it’s an opportunity Koreshkov would also be interested in. 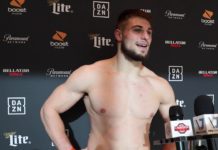 Bellator 219: Dalton Rosta Reflects on Debut Win, Says Nerves Were At a Minimum 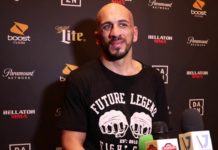 Bellator 219: Saad Awad Feels Fight with Girtz Could Have Gone Either Way, Livid With One Judge