Flyweights Jordan Espinosa and Eric Shelton kicked off UFC Nashville with a tightly-contested fight that gave Espinosa a victory in his promotional debut.

Jordan Espinosa has won nine of his last 10 fights including his current four-fight win streak. Espinosa is a two-time Contender Series competitor, and the second time was a charm, as he scored a TKO with just two seconds left in the fight. That was enough to earn him a UFC contract. He was supposed to make his promotional debut in November, but pulled out with an injury.

Eric Shelton was a competitor on the flyweight season of The Ultimate Fighter, eventually losing to winner of the show Tim Elliott. He lost a pair of split decisions to start his UFC career, but is 2-1 since then. He last won against Joseph Morales in November with the split decision going his way this time.

Jordan Espinosa got off to a quick start with a spinning back kick landing on Eric Shelton. Espinosa tried to get the fight to the ground, but Shelton kept the fight standing. Espinosa landed a variety of strikes on the feet, including a one-two combo followed by a low kick. A spinning back kick landed for Espinosa and Shelton answered with a right straight. A counter-left and straight right landed for Eric Shelton, then a shot to the groin by Espinosa stopped the action. The fighters exchanged kicks then Shelton stuffed a takedown. As they separated, Espinosa landed a knee. After an exchange of leg kicks, Shelton landed a right hand to close out the round.

Shelton started the second with a right hook and a pair of jabs. Espinosa landed a jab then had a kick caught, to which Shelton fired back with a right hand. Shelton started to find his rhythm, catching Espinosa with a variety of strikes, but Espinosa was diligent with his low kicks. Shelton ate a jab from Espinosa with 1:45 remaining in the first round then nearly got a hold of a clinch until Espinosa escaped his grasp. Espinosa scored a quick takedown with under a minute remaining and the fight got back to the feet immediately. Espinosa had a bouncing confidence to him on the feet, but Shelton was able to catch him with a combination as time expired.

The third round started but was quickly paused by the referee for him to wipe up some moisture in the center of the canvas. After action resumed, Espinosa landed a head kick, but happened to poke Shelton in the eye as he was reeling in his leg. Shelton was approved by the doctor to continue, then caught the elusive Espinosa with a double jab. Shelton chained together a combination, then caught a kick from Espinosa. Shelton was unable to generate offense off the caught kick and Espinosa got back to work. Shelton caught Espinosa with a lunging left, and Espinosa responded with a leg kick. Shelton landed a leg kick of his own and continued to press forward. Lefts were exchanged by both fighters, then Shelton caught a kick and landed an overhand off of it. A superman punch connected for Shelton, and he was able to catch another kick. Shelton was totally settled in in the third round, landing jabs and combinations at will while pushing forward. The flyweights threw down to cap off the contest with Espinosa’s back to the cage. Haymakers landed for both fighters as time expired.

Swinging til the end!

Who took the first fight of the night on your scorecards? #UFCNashville pic.twitter.com/czDY8jMs26 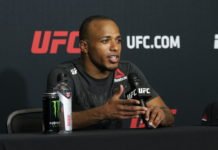