Back in Thackerville at the Winstar World Casino and Resort, Bellator MMA had featherweight action topping the card for Friday night’s Bellator 218.

The featherweight match-up finished off the night, but earlier, Bellator 218’s preliminary card featured action from top middleweight prospect Johnny Eblen, Vladimir Tokov (whose brother Anatoly was fighting on the main card), and promotional stalwart John Macapa. Not a bad group, with a couple of fights on the women’s side mixed in as well, including a catchweight 130lb fight between Deborah Kouzmin and Ky Bennett.

The Bellator 218 live stream for the prelim card was set to kick off at 6:45PM EST on Friday, March 22 — with all the action available below! Plus, live results throughout the evening ahead of the main card on Paramount Network and DAZN at 9PM. 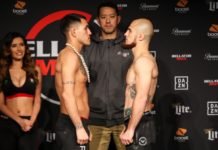 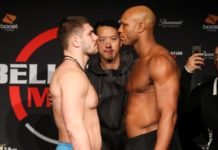 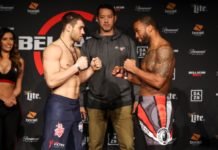