SBG Ireland made it two straight wins on the Bellator 217 main card as Kiefer Crosbie made short work of Daniel Olejniczak.

Irish welterweight prospect Kiefer Crosbie was in action Saturday, taking on Poland’s Daniel Olejniczak. Another member of SBG Ireland, ‘Big Daddy’ had made his Bellator debut last time out, going the distance for the first time in his career. That decision win maintained his perfect record as a pro, and he was looking to go 6-0 heading into Saturday night at Bellator 217 in Dublin, Ireland.

Plenty of back and forth, scrambling action punctuated the second fight on the Bellator 217 main card. A spirited fight, but Kiefer Crosbie was getting the better of things on the feet.

When Crosbie got it to the ground, however, it didn’t take long. The body triangle was locked in, and a couple of punches followen. Then, the hand slipped under the neck. From there, it was just a matter of time before the tap came – and it did.

With the win, Crosbie improved to 6-0, and will probably be due for a step up in competition at 170lbs. He lauded Irish MMA fans after the bout, calling them the best in the world. 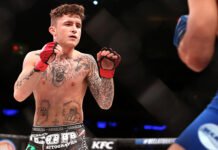 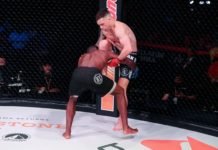 UFC 254’s Lauren Murphy: Jessica Andrade May Deserve Title Shot, But Not the Next...