A.J. McKee will put his impressive 13-fight win streak on the line when he takes on former featherweight champ Pat Curran at Bellator 221.

Bellator is hoping to pair up A.J. McKee and Pat Curran once again. ESPN was first to report the news that the pairing, originally scheduled for September 2018, was back on for Bellator 221. That event is set for May 11 in Chicago, Illinois.

The star pupil of Team Bodyshop under father Antonio McKee, A.J. McKee (13-0) currently holds the record for the longest win streak in Bellator history. The talented featherweight has seven finishes among his thirteen wins, but has frequently been faced with questions regarding his level of opposition. Curran should silence that.

Bellator 221 is set to be headlined by lightweight champion Michael Chandler taking on featherweight rival Patricio Pitbull. The winner of McKee vs. Curran could get the nod for the next featherweight title shot down the line — though it’s worth noting that Bellator is expected to launch a featherweight tournament later in the year. 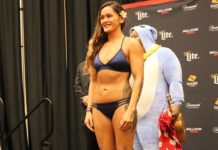