Bellator MMA CEO Scott Coker addressed the rough start to the promotion’s weekend double-header, and the prospect of Cro-Cop vs. Fedor following Bellator 216.

Uncasville, CT — It wouldn’t be MMA if things went according to plan. Hosted over back-to-back nights at the Mohegan Sun Arena in Uncasville, Connecticut, Bellator 215 and Bellator 216 were a couple of tentpole events that didn’t quite live up to their big top billing. Bellator 215, in particular, fizzled, though as Bellator CEO Scott Coker mentioned following the second of the events, there were some good fights on the card. Just not the main event, which ended 15 seconds in when Matt Mitrione landed a low blow on Sergei Kharitonov.

The main event the next night, MVP vs. Daley, went the distance. Yet it was an anticlimactic end to a heated grudge match, a fight in which Paul Daley decided now was the time to wrestle, after years of complaining about wrestlers holding him down. That Michael Page struggled as much as he did shows he still has work to do, but Page at least took home the decision win, and moves on in the welterweight grand prix.

Coker, meanwhile, was left to address what went right, what went wrong, and where Bellator goes from here.

“I thought it would be more of a striking event,” he said of MVP vs. Daley. “But I don’t blame [Daley], because he’s fighting a very good striker as well. I think that he thought if he could wrestle him, take him down, maybe mix it up a little bit, some more opportunities might open up to score with his hands. But it just didn’t happen, I think time ran out on him.”

That it did. While Coker said he doesn’t score fights, but rather observes them as a fan, he did add that “the theme of the first couple rounds seemed like there was not much action on his [Daley’s] part. I think he had a slow start, and I think he lost the first couple of rounds, just on inactivity. So now, MVP just has to win one round.”

“That’s the nature of these five rounds fights, it’s get busy, get there early. I think he started just a little bit too late.”

The bout was another piece of the welterweight grand prix puzzle. With talk of another grand prix to come, Coker admitted that one will happen. Just not yet. “We are not going to be doing multiple tournaments at a time,” he insisted.

That having been said, Coker confirmed Bellator officials had talked about a featherweight tournament next, though nothing has been decided.

Bellator 216 certainly had a better atmosphere than 215 the night before, which saw some iffy judging and a main event end early due to a low blow. “Today we had some great fights. And last night we had a couple of great fights,” he said of the double-header. “We’ve been on a role with Hawaii and all the different, great fight cards we’ve had. And last night, to me, it was an okay night, it didn’t end well, but we had a couple good fights on the televised portion of the card. I think they were pretty good.”

Then there’s Cro-Cop, who topped Roy Nelson is a fight that went to decision. One name in mind for the Croatian legend is Fedor Emelianenko. It’s the biggest legends fight any promotion could make.

Though Coker has not spoken to Fedor since Bellator 19 in January, he revealed that “I’ve always said look, if you want to do one in Russia, or fight one in Japan, before he moved on and retired, that would be a lot of fun for us. Especially if you want to do it in Moscow. I know Mirko wants to avenge that fight, he’s told me personally, his management has repeatedly asked me about it. But it’s something I have to talk to Fedor about.”

One place Bellator might not be getting back to any time soon is Canada. The promotion has been absent for years despite boasting two reigning Canadian champions. Asked by Cageside Press about the possibility of a return, Coker explained that “Canada is a little bit tricky, because the venue there in Toronto where we would go is very busy. So that’s a big problem.”

“With Rory [MacDonald] fighting Jon [Fitch], if Rory wins, his continuation in the tournament will probably be in June, so that’s a possibility, but most likely it will end up maybe in New York or L.A.” Well, that doesn’t bode well for a trip to the Great White North.

For more from Scott Coker, check the full Bellator 216 scrum with the promotion’s CEO above. 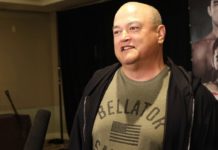