Things don’t always go according to plan, and that was the story for Mike Kimbel on Friday at Bellator 215, where he was upset by John Douma in an eye-opening finishing sequence.

In a fight designed to put the spotlight on a prospect coming off a big win, Michael Kimbel faced off against John Douma early on the Bellator 215 main card. At just 21 years old Kimbel had been explosive so far in his career — with two first round finishes, the second coming in just six seconds at Bellator 207. Douma, meanwhile, a CES alum, was also young in his career, but making his Bellator debut off his first loss as a pro.

Despite a booking that seemed to put the spotlight on one fight, the story did not go according to plan in the end.

Kimbel went right after the finish with a high kick that missed, which put the fight past six seconds, but certainly announced his intent. A leg kick followed, and Kimbel was clearly on the hunt, Douma backpedaling out of harm’s way at times. A spinning kick from Kimbel missed as Douma ducked under, then initiated the clinch. It was Kimbel getting the fight down, however, landing in his opponent’s guard. Up quick, but with Kimbel in control and taking it right back to the canvass. Douma looked for a triangle, or arm-bar, only to be slammed down by Kimbel.

😲💪@JohnDouma145 is your winner at #Bellator215 via triangle!

Watch the main card LIVE now on @ParamountNet and simulcast on @DAZN_USA. pic.twitter.com/Osvhnn6Izp

Yet Douma did not let go of the submission attempt, despite essentially being dropped on his head. Kimbel landed some shots to the head, still trapped, but moments later, was tapping for the first loss of his career. 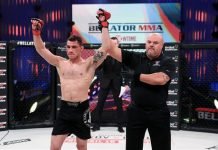 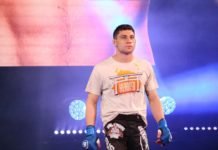 John Douma vs. Will Smith Set for Bellator 256