After taking the first two rounds, Eduardo Dantas sat on his lead in the third, taking home a decision victory against Hawaii’s Toby Misech at Bellator 215.

Bellator loves its flying knee finishes, and when a replacement was required to face former bantamweight champ Eduardo Dantas on short notice, Hawaii’s Toby Misech got the call. Misech had a breakout moment just one fight back at Bellator 212 in the island state, where he knocked out Edward Thommes in his promotional debut. That helped shake off a Contender Series loss to Ricky Palacios, and no doubt earned him this giant step up in competition at Bellator 215 on Friday.

It was Misech holding center early, with Dantas on the outside. The ex-champ fired a high kick, Misech would later connect with his own kick to the calf. Plenty of feints during the feeling out process early; Dantas would then charge forward after Misech slipped, driving him into the cage. Misech defended with the whizzer, but Dantas was determined and eventually would get the fight to the ground, moving to half guard in quick succession. Dantas then moved to side control, isolating an arm, with a kimura a distinct possibility. When that fell through, however, the Brazilian worked to create space, looking for room to land strikes.

Round two saw Dantas looking to pick up where he had left off. Misech, however, was able to slow the pace of the fight, proving evasive. Dantas finally latched onto a leg about two minutes in, while Misech scrambled to the fence, somehow staying on his feet. For a time, anyway. Dantas, soon enough, had dragged him down, and worked on taking the back; failing that, he was on the hunt for a choke. Controlling the back with a single hook in he tried in vain to slip an arm under the chin; that single hook would become a body lock, but the bell to end the round would sound with Misech surviving.

The third saw Dantas go right to work, but Misech was right there with him, swinging hard and knowing he needed a finish to walk out of Uncasville with a win. The lateral movement of the champ was superb, but the quick start to the round soon became a dance with Dantas circling away, and Misech following. Much to the aggravation of the fans in the stands. With ninety seconds left, the question was whether Dantas would make any mistakes. He appeared a man who knew he had the lead, and with the decision in the bank, he circled, backpedaled, and despite eating a shot or two from Misech, walked out with his hand raised. 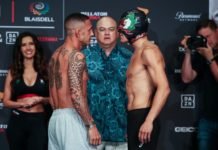