Reigning Bellator featherweight queen Julia ‘The Jewel’ Budd recently expressed her interest in taking on 200+ pound BJJ specialist Gabi Garcia in an openweight title fight for RIZIN FF. However, seeing that Budd is looking for someone to fight, Leslie Smith has offered up her talents to the champ.

When it comes to the women’s featherweight division, Julia Budd is unquestionably the best fighter in the division behind the likes of Amanda Nunes and Cris ‘Cyborg’ Justino.

Bellator’s first 145-pound champion currently rides an impressive 10-fight winning streak and has racked up two title defenses in her time with the promotion.

With the recent partnership between Bellator and RIZIN FF only getting stronger and stronger, we’ve seen an influx of cross-promotional title bouts as of late. Particularly involving titles and champions.

Having seen the workings of the crossing overs, Budd recently expressed her interest in participating in one of these kinds of bouts. But with limited options on RIZIN’s side of things, the most realistic option seems to be an openweight title bout with the unbeaten 230-pound BJJ ace, Gabi Garcia.

Let’s do this already 🏆🏆🏆🏆🏆 @BellatorMMA https://t.co/IjmlLJEXU4

Garcia, of course, was very open to this idea as she made it clear she was interested as well.

With RIZIN 15 coming up in April and Budd having not fought since July 2018, who knows how possible this match-up might be.

However, when it comes to more reasonably sized opponents, one very outspoken free agent expressed interest of her own after seeing the pair trying to set something up.

Former UFC bantamweight veteran Leslie Smith has been without a fighting home since April 2018 when she was expected to face Aspen Ladd at UFC Atlantic City. In the end, after Ladd missed weight, Smith attempted to re-negotiate her contract which was to expire after the fight. Thus leading to the UFC just flat out releasing her.

Many believe, Smith included, that the release was due to her stance on unionization in MMA and her leading of the Project Spearhead campaign.

Regardless, Smith still finds herself seeking somewhere and someone to fight. Which is what has led her to now call out Budd.

“@JuliaBudd if you’re looking for a fight I’m game, I make weight and I’m exciting. Must be rough being the champ and sitting on the shelf for so long. If you don’t want to be out for a whole year you need to get something lined up in the next two months. #callyourmatchmaker

“Ayy @BellatorMMA , your champ is desperate for a fight, bring me in and it’ll be the most exciting title fight @JuliaBudd has ever been in” Smith tweeted on Friday.

Despite being a bantamweight and flyweight at one point in her career, Smith has fought in bouts at 140+ pounds on two separate occasions. First when she fought Ediane Gomes in 2011, and the second time being when she welcomed Cris Cyborg to the UFC at UFC 198 in 2016. 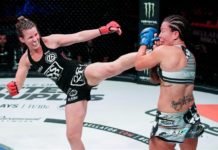 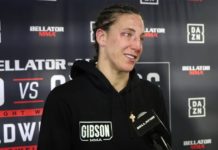