Glover Teixeira and Ion Cutelaba were supposed to fight at UFC Brooklyn last month, but Cutelaba was forced out due to an injury. With Teixeira staying on the card and winning impressively, the promotion has simply rebooked him against the streaking Cutelaba rather than finding a new light heavyweight to fight the Brazilian.

Glover Teixeira faced Karl Roberson last month having alternated wins and losses in his last six fights, meaning he was due for a win if you believe in patterns. Roberson knocked Teixeira down early and had him on the brink of a stoppage. Glover survived and turned the tables by securing an arm-triangle choke in the same round. It was an unbelievable comeback that kicked off the first main card of the ESPN era.

Ion Cutelaba came into the UFC at 11-1, but struggled out of the gate, going 1-2 in his first three fights. He’s come into his own since then with an aggressive approach, knocking out Henrique da Silva in 22 seconds, and Gadzhimurad Antigulov with less than a minute left in the first round. The former European Sambo champion has only fought twice since 2017 due to a USADA suspension and the injury that pulled him out of the original bout with Teixeira.

UFC Miami, the promotion’s third event on big ESPN, takes place on April 27 from the home of the Miami Heat, the American Airlines Arena. The only other bout linked to the card is the possible main event between muscle-bound middleweights Yoel Romero and Paulo Costa. This will be the Octagon’s first trip to Miami, Florida, since 2003. Stay tuned to Cageside Press as more fights are added to the card. 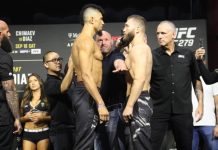 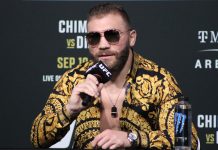