Geraldo de Freitas Jr brought a smart game plan into his UFC debut, refusing to be drawn into a slugfest with fellow prospect Felipe Colares.

A pair of debuting fighters in the bantamweight division appeared early on the preliminary card at UFC Fortaleza. Geraldo de Freitas Jr. and Felipe Colares were entering the octagon for the first time on Saturday night. The scouting report on Colares suggested he’d bring plenty of explosiveness with him in Fortaleza, while Shooto Brazil champ Freitas was a bit more of a wildcard.

Following an early feeling out period, there was penty of action in the debut of these two Brazilian prospects. Numberous kicks, a handful of exchanges. But if any one moment gets a crowd going in MMA outside of knockouts, it’s the possibility of a slam. Ducking down under a nasty looking right, Colares scooped his opponent up, getting him quite elevated before dumping him on his back. Not the Rampage-style slam that people hoped for, and Freitas actually got the upper hand.

That would allow him to get on top, as Colares scrambled, scooted, and flailed, looking to get close enough to the cage to escape. When he couldn’t, Freitas would look to isolate an arm, but that in turn allowed Colares to move to the top, where he would finish out the round.

In round two, Freitas opened up early, and rocked Colares with a 1-2 combination. Colares was on his heels, but managed to regain his composure enough to latch on to his opponent, perhaps thinking guillotine. Yet as they went to the ground it was Freitas in control, moving to mount, then the back, setting in a body lock. Colares would turn, and eventually slip free, reversing position. On top, he landed a punch to the body, but had to be wary of the triangle from Freitas.

By the mid-way mark, the transitions had become the highlight of the fight, which is no slight to the action.

The third saw Freitas in control, using his grappling and takedowns to control the bout. Especially as Colares came on in the final minutes of the fight. With the two standing and trading, Freitas made the wise decision to take his opponent down. Colares would escape once more, and in the final ten seconds, swing away, the pair trading right to the final bell. Freitas, however, had already run away with the fight on the scorecards. 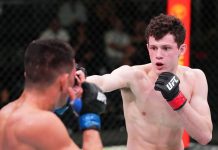 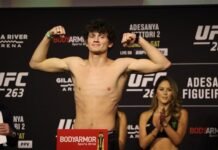