Demian Maia isn’t prepared to walk away from MMA just yet, and showed why with a win over Lyman Good at UFC Fortaleza on Saturday.

One of the more overlooked story lines on the UFC Fortaleza card on Saturday night was the presence of Demian Maia. A UFC title challenger in two weight classes, Maia had lost three straight heading into the ESPN+ card, starting with his loss to Tyron Woodley. And while that’s not a spot that any fighter wants to be in, there was also the question of competition.

After all, Maia’s losses came against Woodley, Colby Covington, and Kamaru Usman. A.k.a. the champion, the interim champion (for a while, anyway), and the next title challenger.

Opposite Maia, in what could conceivably be one of his last fights, was former Bellator MMA talent Lyman Good. Good, who once won the Bellator welterweight title, found himself with his back to the fence early. And from there, on his back period, as one of the most skilled grapplers in the game went to work.

Good did make it back up, but he gave up his back doing so. Demian Maia was on him like a backpack, body lock on, looking for a choke. And while it took a little bit, Maia would eventually force the tap, winning via a standing rear-naked choke. 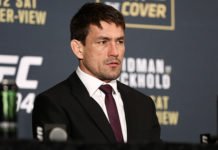 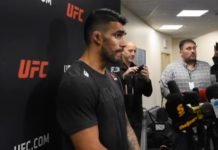 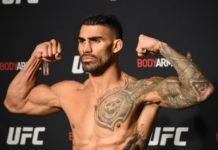