Coming off a huge win over Aaron Pico at Bellator 214, Henry Corrales credited The MMA Lab for changing his fortunes.

Los Angeles, CA — Henry Corrales was more than just “Ok” at Bellator 214 on Saturday. In the co-main event, against blue chipper Aaron Pico, Corrales weathered an early knockdown, regained his senses, and came back to finish the prospect with a stunning knockout.

Many had expected the fight to be a long, hotly contested one. They were half right. Corrales pulled off the finish in just over a minute.

Pico had the spotlight heading in, but it was Corrales who stole the show with the thunderous comeback finish. Speaking to the media including Cageside Press after the bout, he suggested that the fight “kind of closely resembled my actual real life. I put myself in some sh*tty situations, and had to fight my way out of it.”

Which is exactly what he did. “I got up, threw a couple shots, circled out, recomposed myself.” After that came an exchange in close that saw Corrales nail Pico with a hook, right on the button.

The win put Corrales at 17-3, and on a five fight win streak. He credits his newfound success to moving to Arizona, to join The MMA Lab, one of the sports’ hottest camps at the moment. “It changed my life, moving out there with Benson Henderson and all those guys,” Corrales said Saturday. “It’s just a high quality place. Bunch of good dudes.”

“I would never try to excuse those losses,” he said of trio of defeats against Patricio Pitbull, Emmanuel Sanchez, and Daniel Straus, “but there’s reasons behind them. I’ve got my sh*t together now.”

Of course, five fights at featherweight should put Corrales in the title picture. Yet champ Pitbull seems fixated on lightweight king Michael Chandler instead. “I don’t care. I’m not sure these guys really give a f*ck about what I do,” Corrales said Saturday in response to social media chatter between Pitbull and Chandler. “They know what I want.” 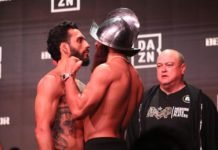 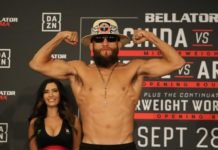 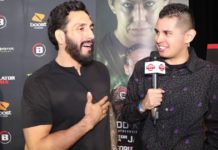