Don’t let his 1-1 record on MMA sites fool you. J.W. Kiser, fighting former WWE superstar Jack Swagger at Bellator 214, has a wealth of experience — including a tag team MMA match!

Los Angeles, CA — Going into Bellator 214 this weekend in Los Angeles, the attention has been on the big names. Bader. Fedor. Pico. And Jack Swagger, WWE star (properly Jake Hager). Lots of attention has been paid to Swagger/Hager, and to be fair, there’s good reason for it: the pro wrestler, with legit amateur wrestling credentials, is the latest to make the jump between the professions. Welcoming him to the cage, meanwhile, is J.W. Kiser.

When it comes to Kiser, well, few are familiar with the heavyweight. The odds reflect that. “Vegas has got me 25 to 1 as an underdog,” he pointed out, speaking to Cageside Press ahead of the fight. “I don’t think oddsmakers really understand what experience means. He’s jumping right into professional MMA. He may be successful, but it’s like almost going from high school football to the NFL.”

It’s an interesting analogy, and may not be far off. “There’s a speed of the game factor I think that you need to adjust to,” Kiser explained. “Not just speed of the game, but to get in a few tough amateur fights, and learn how to be able to battle your way through that, is such a big factor in my opinion when it comes to MMA in general.” Without real fight experience, well, “you don’t really understand what it’s like in there. There’s nothing you can do to train for that.”

Kiser is not blind to his opponent’s credentials, mind you. “I know he was a Division I All-American wrestler and that’s commendable to say the least,” he told us. “But this is a different world. It’s different when you’re getting punched in the face.”

Kiser knows it well. Despite what the online record curators may tell you, 1-1 is not an accurate reflection of his combat sports career. “Started out in boxing when I was 14,” he explained. “Every MMA website I’ve been to has my record incorrect. That’s one thing, the evolution of the sport – this is a really new sport. The UFC has been around 25 years, but, MMA has not really been popular, it didn’t really hit heavy until the early 2000s.”

“Because of that, the sport is still evolving, as far as the regulations go, the commission goes.” Are record keeping, well… “My point is, I have 18 unsanctioned fights. I was in an actual tag-team MMA match. Yeah you heard it, Swagger — I was in a tag-team MMA match.”

“I know that’s crazy,” Kiser added. “Going back to the wild west days, is what we like to call them. Before the commissions got involved, and got these things sanctioned. And thank god they did. Because this is about safety. I’ve fought guys they pulled out of the crowd.”

At least he can rest assured knowing Swagger won’t be tagging anyone in for this fight.

Bellator 214 takes place Saturday, January 26 at The Forum in Los Angeles. The fight airs live on Paramount Network and DAZN. 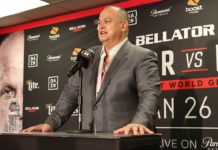 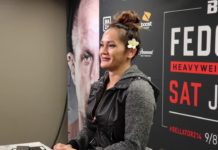 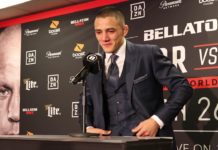 Bellator 214: Aaron Pico Admits He Needs to Use His Wrestling “A Little More”