Henry Corrales thinks the hype around Aaron Pico is justified, and he’s amped up for their fight at Bellator 214.

Los Angeles, CA — At Bellator 214, it’s Henry Corrales’ job to play spoiler. That’s because he’s been paired up against Aaron Pico, one of the promotion’s fastest growing stars. The attention will be on Pico heading into this weekend’s event in L.A. Yet don’t count out ‘O.K.’ Corrales, who is currently on a four-fight win streak at featherweight with victories over Noad Lahat and Georgi Karakhanyan.

“Just excited about the opportunity,” is how Henry Corrales put the feeling of fighting near home against a rising prospect in Aaron Pico. He spoke to reporters on Wednesday, at the Bellator 214 open workouts. “He’s good. He brings the noise. He’s smashing these guys, he’s putting them away.”

“When we got the call, it was just f*cking exciting, you know?” Corrales added. “Like, let’s f*cking do it. We haven’t taken preparations lightly for this guy. He’s a serious opponent.”

It’s Corrales third time fighting at The Forum, which is further cause for excitement. Plus, career wise, “I’m super grateful for the opportunity.” Especially with the fight now being the co-main event, as Gegard Mousasi was forced off the card due to injury. “‘You’re fighting in your home town, tough guy, I’m already like ‘yeah let’s f*cking get it,’ then you add that on top and I’m like ‘hell yeah, even cooler!'”

Corrales has been training with The Korean Zombie. “We’re trying to get him to move out here, to the States. He’s out here training, visiting the MMA Lab in Phoenix, Arizona. I moved out there not too long ago, with Benson Henderson, Coach Crouch.”

“We think he’s going to make the move.”

Fans will see if that training pays off when Corrales meets Pico in the co-main event on Saturday, January 26. Bellator 214 airs on Paramount Network, and online via DAZN. Watch the full media scrum with Corrales above. 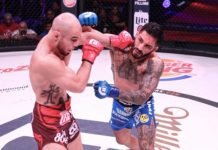