With the biggest opportunity of his career looming, Allen Crowder is ready to test Greg Hardy’s mettle, and gas tank, when he welcomes the fallen NFL star to the octagon at UFC Brooklyn.

Arguably the most anticipated fight at this coming weekend’s UFC Brooklyn isn’t the main event. It’s not the return of Paige VanZant, nor the always entertaining Cowboy Cerrone. Instead, it’s the co-main event of the Fight Night card, featuring the debut of former NFL Pro Bowler Greg Hardy (3-0) against fellow heavyweight and Contender Series alum Allen Crowder (9-3, 1NC).

The attention to date has mainly been on Hardy, whose tarnished reputation outside the sporting world (he was convicted of assault and communicating threats, only to have the case dropped on appeal when the victim did appear to not testify) has caused many to question whether he should even be in the UFC. Yet the man welcoming him to the big leagues should not be overlooked. And Allen Crowder knows he has a massive opportunity ahead of him. After all, there are as many people hoping to see Hardy knocked senseless as there are rooting for him to win. If not more.

Like a number of fighters, Crowder got his start in football, before a chance encounter at a night club where he was bouncing led him to joining a gym, and training in mixed martial arts. Already a fan of the UFC, his career blossomed from there. Which has led the new father (he recently had a baby girl) all the way to the promotion years later.

Crowder is returning from a knee injury that forced him off the UFC 225 card earlier this year. A torn meniscus, Crowder was hoping to take a fight with it, “because I could still kind of walk on it. And I could move around. The only problem was, when ever I straightened it out, it would swell back up.” After surgery, the injury took two to three weeks to heal up, and fully healed, Crowder told Cageside Press that the joint isn’t giving him any trouble. Still, it was a serious enough setback. “Whenever it tore, it flipped underneath my kneecap, and was lodged in between there. So they went in, and cut half my meniscus out.”

Waiting and getting the knee repaired allowed Crowder to be available when the UFC finally called up Hardy to the big leagues, however. Perhaps it was just meant to be. “I was supposed to fight back in June, I ended up having that surgery. I tried to get another fight soon. They called me for a fight in September, I ended up having my little girl in September so I couldn’t take that one,” he explained of how the match-up came to fruition.

“This is always going to be something that comes up in the future, for the rest of his life. That’s something he’s got to deal with. He’s got to get right with God on that.”

“I was looking for another fight,” he continued, “and I watched Greg Hardy fight on the Contender Series. I was like ‘that would be a good match-up.'” Crowder had been keen to fight in New York ever since the first Madison Square Garden card. His coach was also from the city. “My manager called me up in December and said ‘hey man, would you like to take a fight against Greg Hardy in New York?’ and I was like ‘perfect, that’s exactly what I wanted.'”

Leading into UFC Brooklyn, the narrative, of course, became about Greg Hardy, the man. It has been an ongoing theme. Months and months ago, an ESPN editorial called the UFC’s signing of Greg Hardy “a major mistake.” Now, he’s making his debut in the promotion on their network, in the co-main event slot. Ratings no doubt are the underlying reason. Crowder, well, he just wants to get in there and fight the man.

“I’m not God, I can’t judge the guy, you know what I mean?” he said of Hardy the person, as opposed to Hardy the fighter. “I don’t agree with the things he’s done in his past.”

Having said that, he added “that was a long time ago. Hopefully he don’t do sh*t like that no more.” And either way, “this is always going to be something that comes up in the future, for the rest of his life. That’s something he’s got to deal with. He’s got to get right with God on that.”

Getting right with God is Hardy’s problem. Crowder, well, he said simply that “I just want to fight.” He’s excited for the opportunity, and Hardy’s past doesn’t change the game plan any. “No matter what he’s done, I’m going for the win, so it doesn’t even matter.”

There is a little extra motivation for Crowder, however. “The whole co-main event, winding up on that, is extra motivation.” And ‘Pretty Boy’ knows the importance of getting a win at UFC Brooklyn.

“I lost my last fight, I gotta get this win right here,” he told us, since “the UFC can cut you at any time. If you have two losses in a row, who’s to say there’s going to be a third fight? I got a four fight contract, but nothing’s guaranteed. I’ve got to go out there, I’ve got to put on a good show. That’s the game plan.”

He’s a big powerful guy, very athletic. I want to see how powerful and athletic he is coming into the second round.” – Allen Crowder, on testing Greg Hardy’s stamina

Getting the card placement that he did, in the co-main event coming off a loss, “it was definitely a surprise,” Crowder told us. Even factoring in Hardy’s involvement, since there are a number of other bigger names competing at the event. “But it’s definitely a surprise I’m very excited about. The co-main event on the first ESPN+ card, that’s a hell of a way to bring it back from my last fight.”

Crowder’s game plan for Saturday is clear: see what Hardy is truly made of. The ex-NFL star has never gone past a minute in his fights as a pro. “Definitely want to drag him into deep waters. He’s a big powerful guy, very athletic,” Crowder observed. “I want to see how powerful and athletic he is coming into the second round.”

As for the possibility of taking the fight to the ground, with Hardy’s ground game being a question mark, “I’m kind of going off what he does. If he comes bull-rushing in, I may take him to the ground,” said Crowder. “If he wants to keep it standing, and doesn’t go all Hulk-savage crazy on me, then I’ll keep it standing with my boxing. I’ve been working on mostly my boxing over the year, and I feel very confident with it.”

All the attention being on hardy has certainly helped take “a little pressure off me,” Crowder added. “Everybody’s hyped up on Greg Hardy, he’s got those three knockouts as a pro. So everybody thinks he’s going to go in and knock me out. When ever the fight comes around next weekend, and I get the win, that’s going to be a turnaround, and all the headlines will be talking about me instead of him from there on out.”

He has plenty of fans supporting him, and gets plenty of feedback as far as Hardy is concerned. “I get messages probably every day, at least every other day,” most of which are hoping for Crowder to knock Greg Hardy out. “A lot of positive motivation and stuff from people, even people I don’t even know.”

Starting the year with the biggest opportunity of his career, Allen Crowder’s goal for 2019 is simple. “I want to finish out my contract. I’ve got two more fights after this one right here, the plan is to win all three of those fights I’ve got left, and then see where it goes from there.”

There is one fight that certainly interests him, however. “Curtis Blaydes is someone I’ve been wanting for a long time,” he said. The pair met early in 2015, with Blaydes, now a top contender in the UFC, getting his hand raised. It’s a loss Crowder would love to avenge.

As for another loss, his most recent (his UFC debut against Justin Willis), Crowder has a few takeaways. “You gotta go in, and you gotta have a good game plan. You definitely can’t judge a book by its cover.”

Crowder saw himself with the height advantage, and Willis as the heavier man. He expected to have a clear edge in speed. It didn’t help that he was toying with a cut to light heavyweight, however.

“I had gotten down to about 230, and it was just killing me, my strength was gone,” he explained. “I went in with a bad game plan, and he was a lot faster than he looked. He ended up catching me right off the bat, he took advantage of it, and it really worked out for him. It was definitely a learning experience.”

“You’re only a rookie once, and I don’t plan on making those mistakes again,” he finished.

Now, it’s Crowder’s turn to welcome a fighter to the UFC. That it’s the notorious Greg Hardy has raised the profile of the bout. Yet Crowder appears ready to tune that out, and get to work. 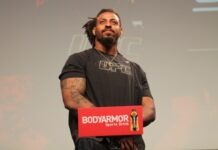 Greg Hardy Reacts to UFC 272 Loss: “Gotta Get my Sh*t Together”