During UFC 232, the UFC announced some big news for fighting fans that live in the Sunshine state, with an ESPN+ card coming next year.

The UFC has never touched down in the state of Kansas across the organization’s history. That, however, is about to change. While the promotion did get close, heading to Kansas City in 2017, that was in Missouri. However on March 9 the promotion’s absence will finally be rectified, as the UFC announced during UFC 232 that they will be coming to Wichita, Kansas next year for UFC on ESPN+ 4 (UFC Fight Night 146).

The card is set for the Intrust Bank Arena in Wichita, and tickets go on sale January 19 according to the UFC.  As of now there are currently no fights announced for the Witchita, Kansas card, but there will likely be some announced soon.

It’s worth noting that UFC Wichita takes place in an incredibly packed month. March will boast five UFC events in 2019, including UFC 235, which kicks off the month in Las Vegas on March 2. Daniel Cormier is widely expected to headline that card, in what could be his retirement fight.

Stay tuned to Cageside Press for more fight announcements for the UFC on ESPN+ 4 card in the near future! 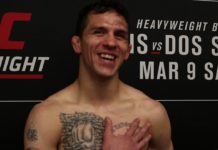 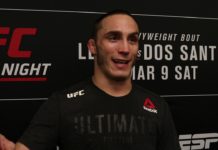 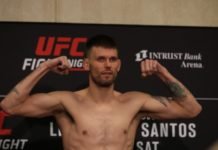